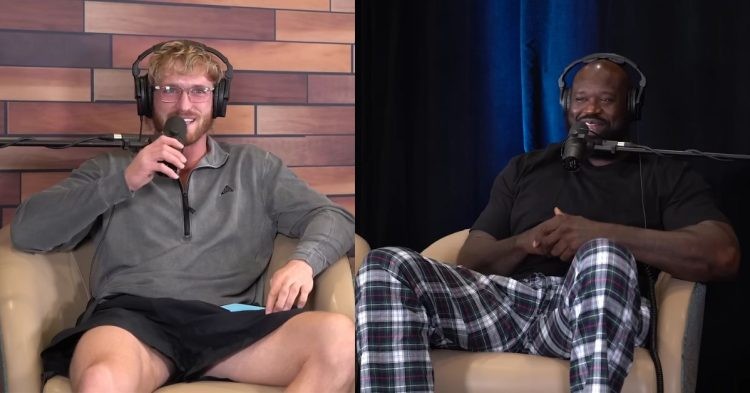 Shaquille O’Neal is a former NBA player most known for his time with the Los Angeles Lakers. He is considered one of the most dominant big men we have ever seen. After his playing career ended, O’Neal has kept himself busy and entertained through a plethora of avenues.

Most recently, he was a guest on a podcast of famous YouTuber Logan Paul. Both personalities discussed a variety of issues involving basketball and life. At a certain point in the discussion, the 4x NBA champion managed to diss Logan Paul for his actions and behavior. We should wonder who Shaq compared Logan with and what the nature of the potential insult was.

This is quite an amusing take by Shaq. He was quite nice and polite, showing respect to Logan throughout the whole episode of “Implausive“. However, O’Neal decided to take objection to the way Paul was seated across from him.

“Do me a favor. Close your legs when you’re talking to me. Do you see him? He’s sitting across from me like this. Jeez close your legs, those little boy shorts you got on,” Shaq proceed to spread his legs apart in a comical manner exaggerating how Logan was sitting before he noticed it.

Paul’s fellow podcaster Mike Majlack took the chance to claim that Logan looks even more like a dad than Shaq. To that, Logan wondered if that had anything to do with the glasses he had on. O’Neal did not miss this opportunity to throw another diss at the YouTuber.

“Yeah no, I see them Jeffrey Dahmer joints. You’ve been watching Netflix. So have I. I’m on episode 6.” This led almost everyone there including the podcasters to erupt into laughter over the comparison.

To those interested in the context, Jeffrey Dahmer who was also known as the “Milwaukee Cannibal” was an infamous serial killer and sex offender. He killed 17 men and boys, committing obscene acts to their bodies which include necrophilia and cannibalism. Thankfully he was soon caught and imprisoned. Soon after that, he was killed in prison by another inmate.

Dahmer wore spectacles that looked identical to the ones Logan was wearing. His life story and crimes are now part of a Netflix series called  “Dahmer- Monster: The Jeffrey Dahmer story“. Shaq recognized the glasses from this episode and made the comparison to create an amusing atmosphere.