Shaquille O’Neal Criticizes Kevin Durant, Says His Career Outside of Golden State Warriors Has Been an ‘Abject Failure’ 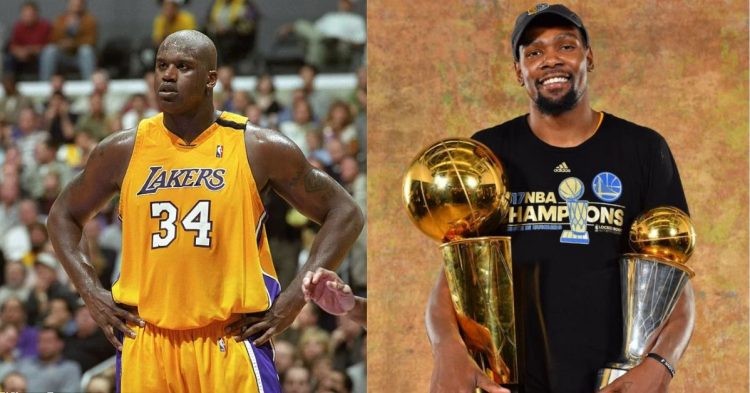 Kevin Durant is one of the greatest basketball players of our generation. Apart from LeBron James and Stephen Curry, KD has arguably been the most influential player. Since his Oklahoma City Thunder days, Durant has proven his doubters wrong.

Despite his ridiculous numbers and game-winning performances, it seems KD still hasn’t convinced people that he is one of the greatest. One person to take a dig at the former OKC star would be NBA legend Shaquille O’Neal.

During a new episode of The Big Podcast With Shaq, the 50-year-old replied to Charles Barkley’s comments on Kevin Durant’s career.

“Charles Barkley is calling Kevin Durant’s career outside of Golden State an ‘abject failure’ … Do you agree?”@SHAQ: “Yeah. … If you’re the guy and you ain’t get it done, that means you failed.”#TheBigPodcast: https://t.co/1ccPgWJWvs pic.twitter.com/7RiqPAoUDu

Barkley had mentioned that KD’s career has been an ‘abject failure’ outside of the Golden State Warriors. When Shaq was asked if he agreed with it, he said, “If you go back and look at his career as a best player being the leader, all goes with that too. We were all there. We saw OKC up 3-1.”

“One more game and when you’re the guy, all the pressure goes on you. A lot of people was talking about the bus driver. Chuck was absolutely right. He was not driving the bus in Golden State. You were on the bus. You were sitting up front,” O’Neal stated.

KD joined the Warriors in 2016 when he left Oklahoma. The interesting point to note is that he joined the team that beat his team the previous year. In the Western Conference Finals that year, the Thunder held a commanding lead of 3-1 over GSW. Going into Game 5, they would have become the champions had they won. However, the Warriors did their thing as usual and made the comeback to win three games in a row.

The next year, when KD joined the Warriors, it seemed like he joined them to only win a ring. That was when many fans started hating Kevin Durant, as he is now one of the most hated players in the NBA.

That’s not all that Shaq said about KD. “So when guys like us go ‘Woah, woah, woah, woah’ and you win and we don’t respect it, don’t get mad at us. That’s how we feel. This is the attitude that Kevin Durant is gonna say, ‘Whoa, I got this many points and I got this and I got that.’ We’re not talking about that. We’re talking about you, the guy, and in championship moments, can you take it to that next level? We haven’t seen that yet.”

Can KD win a title with another team?

As O’Neal claims, Durant has not won a title with a team other than the Warriors. And despite winning two titles and two Finals MVPs in a row with them, it still seems like Shaq thinks he was not the leader in the GSW locker room. He averaged 25.8 points, 7.1 rebounds and 5.4 assists in 208 games for The Bay.

Durant formed a super team with Steph, Klay Thompson and Draymond Green. That was the start of the Warriors dynasty that recently continued this year. According to Shaq, Durant will not be one of the greatest players in the NBA until he wins a title with another team.

However, KD has the chance to achieve that this year after deciding to stay with the Brooklyn Nets this year. He can lead them to the title with Kyrie Irving and Ben Simmons. KD and Kyrie finally put an end to their saga with the franchise. With the right chemistry between these three players, they surely have a real shot at winning the NBA championship.
Tags: Golden State WarriorsKevin DurantShaquille O'Neal
Previous Post