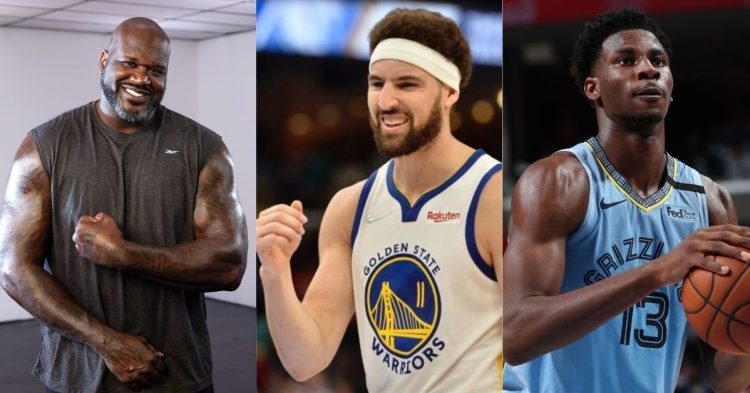 Shaquille O’Neal on the recent episode of his podcast shared his opinion on the brewing controversy between Golden State Warriors and Memphis Grizzlies.

The Memphis Grizzlies and Golden State Warriors have had a rivalry brewing over the past few years. Ja Morant, Jaren Jackson Jr, and the Grizzlies managed to eliminate the Warriors last year in the play-in tournament.

GSW finally got their revenge for last year’s elimination in the second round. They defeated the Memphis Grizzlies in 6 games in this year’s NBA Playoffs. Additionally, Memphis had established itself as a team that “wanted all the smoke” during the regular season. Therefore, after beating GSW in a regular-season game, Jaren Jackson chose to send out a tweet mocking the Warriors.

The exact tweet read “Strength in numbers”. This is the common phrase used by the Warriors, much like the 76ers have “Trust the process“. Each team seems to have a unique slogan that enforces the culture of the team.

Klay saw this tweet, which must have stung following the loss. However, he refrained from responding at the time. He only chose to address the tweet after the Grizzlies were sent home and the Warriors were NBA champions.

Thompson must have realized he went slightly overboard with his use of language at that moment. Therefore he went on to apologize to the media and explained that the thought just randomly popped up in his mind.

The former NBA player was asked what he thought about this beef and what side he was on. It is no real surprise that Shaq went to Klay’s side. Here is what he had to say on the issue.

“Another reason why us champions get upset is when you players act like you champions with this Twitter thing some players that ain’t on that level, act talk like they on that level so sometimes you have to remind him, and that’s all Klay was doing,  I’m not saying Jaren Jackson Jr is a bum but you don’t have that pedigree to which you can speak that G-14 classified language.”

O’Neal definitely has a point. There is almost no argument in people’s minds that Jackson was looking for all the smoke when he sent out that tweet. Unfortunately for him, Klay brought attention to it and mocked him at the worst time possible for Jackson. Just after the Warriors won an NBA title.

Shaquille O’Neal knows how difficult it is to win the whole thing. Moreover, he also knows how easy it is to simply trash talk and send out tweets. Therefore, he sided with Klay and the Golden State Warriors on this one.