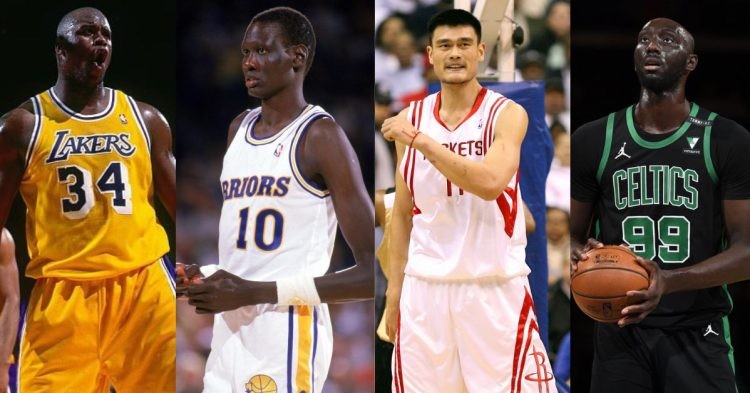 Height plays a significant role in the NBA and it also determines whether a player makes it or not. Although that might be true to an extent, many shorter players have been extremely successful in the league, compared to the tallest ones. When we hear the phrase “tallest player in NBA history”, our minds go to Shaquille O Neal. The former Lakers center towered over everyone he played with and against on the court.

The NBA legend stood at 7’1 tall and height was one of the best attributes of his game. Although he faced players who were as tall as him and even taller, Shaq was a lethal combination of size and power. No one could get past him and stop when he tried to get past.

Who is the tallest player in NBA history?

Georghe Muresan, the Washington Bullets player, is the tallest player in NBA history with a height of 7’7. Many may think that the reason for his remarkable height is his genes. However, the interesting part is that his parents were of normal height. Reports claim that his height is the result of a pituitary gland disorder.

The tallest NBA player currently is Tacko Fall. The 26-year-old star misses the top spot to be the tallest player ever by just an inch. The Boston Celtics drafted the Senegalese in 2019, before letting him sign with the Cavs as a free agent. However, they waived his contract and signed Brandon Goodwin on a two-way contract.

When we think of the tallest, we can also wonder who is the tallest NBA champion. It would be none other than the Lakers giant Chuck Nevitt. The American won the title with the LA-based franchise in 1985. That was the only time he won a ring before retiring in 1994.

Another interesting question we can ask is who the tallest MVP was. The tallest player to win the prestigious award would be Bob Petitt. He won the award in 1956 and once again in 1959 when he was playing for the St. Louis Hawks. The same team is known as the Atlanta Hawks in the current day.

Last but not least, let’s have a look at the tallest All-Star player. It is the one and only Yao Ming, who has made the All-Star team on five occasions. He played for the Houston Rockets his entire NBA career as he endured a 9-year long career without a single championship won.