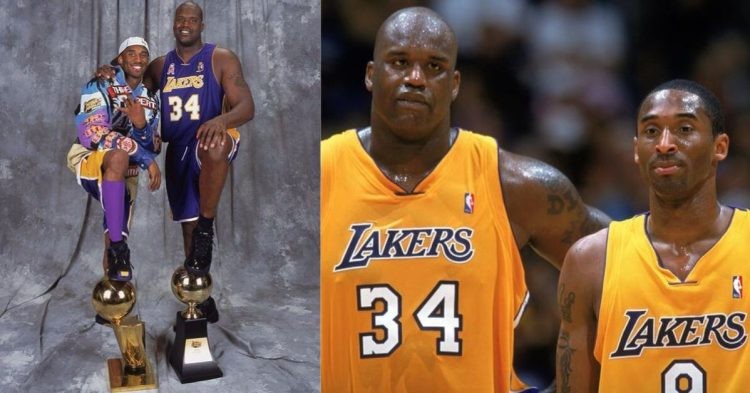 The Los Angeles Lakers are one of the most successful teams in the NBA. They have won 17 NBA titles, the most in history, along with the Boston Celtics. Although they owe their success to many players, Shaquille O’Neal is surely on the list. He dominated the league and went down as one of the greatest basketball players ever.

Shaq was playing for the Lakers during one of their most successful periods. From 2000 to 2002, the LA-based franchise won three titles in a row. Without a doubt, O’Neal was the heart of the team. However, there was one other legend who got the best out of Shaq too; Kobe Bryant.

According to many reports, Kobe and Shaq did not have the best of relationships because of the difference in their opinions. O’Neal has recently revealed the truth in a show with Valuetainment.

Initially, Shaquille O’Neal answered the same question Kobe answered before his death. The same presenter asked the Bryant who Shaq would be if he had Kobe’s work ethic. And his answer was, “he’d be the greatest of all time”. However, the 50-year-old thinks otherwise. He mentioned that he would still be Shaq, before listing out the reasons.

“Kobe was a beast. Nobody worked harder than him. But I think you can find success in many ways. For me I had to [do] eight hours of work, eight hours of business, eight hours of family. Kobe was just getting married, getting into his family, I was already four kids in,” he said.

Kobe called himself The Black Mamba. Even after his tragic death, the Mamba Mentality still lives. He was obsessed with succeeding in the best way possible and hated losing even by the smallest margins. To be honest, Kobe’s influence on the NBA is unmatched, as children still see him as an inspiration to this day.

“So, I was always the guy that presses buttons. The audience thought that it was a personal thing, we hated each other, but no, it was me and my leadership style and what I chose to do to get him to perform at a higher level,” O’Neal added.

Although many reports claimed that the pair did not have a good relationship off the court, Shaq says otherwise. It may not have been the best way to get the best out of Kobe, but it does seem like it worked. Both O’Neal and Bryant motivated each other to achieve what they wanted to: win championships.