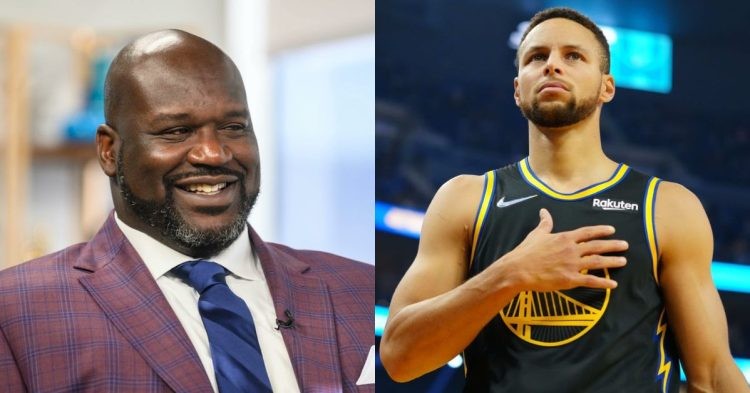 There have been many players who were in unbelievable form in the 2021-22 NBA season. Players like Giannis Antetokounmpo, LeBron James, Luka Doncic, and many others, had one of their best seasons. One player that is surely part of the conversation is Stephen Curry. As we all know, he won his fourth title with the Golden State Warriors, increasing their total number to seven.

People may throw around the best player title too much, but it is an honor when an NBA legend calls you that. Former LA Lakers center Shaquille O’Neal revealed in a new The Big Podcast. He spoke about who he thinks is the best NBA athlete in the world.

Shaq said, “You can have a category, but the real ones are recognized by the championships that you have. Nobody plays better than Steph Curry. He’s a tough shot-taker. tough shot maker. I like where he’s brought his career.”

“I love ‘Rocky’ type stories … Steph wasn’t highly recruited, so to be able to work that hard to become the best shooter and one of the best players in the league, he gets my props for that. I love that kid”, Shaq also mentioned.

We all know how good Steph was in the 2022 NBA Finals against the Boston Celtics. He averaged 31.2 points, 6.0 rebounds, and 5.0 assists in 6 games. The finals also included a Game 4 masterclass by The Chef. He made 43 points, 10 rebounds, and 4 assists in just 41 minutes. That’s not all. The American had a remarkable year overall. He averaged 26.0 points, 6.2 assists, and 5.2 rebounds in 82 games including the playoffs.

As Shaq said, fans recognize the best from the titles won they have won. And Steph recently tied with LeBron James to become the only two players with the most titles among active players. Now the Warriors guard may not be on LeBron’s level, but he surely does not get the credit he deserves.

Haters will claim Curry is selfish since he takes many shots during a game, but there is more to his game than just shots. Steph can dribble and score at the rim, make passes that no one else has the eye for, and even his off-the-ball movement is top-notch.

Shaq is a player who has all the experience in the world. He knows greatness when he sees it. After the year Stephen Curry just had, even his haters would admit that he is the best player in the world.