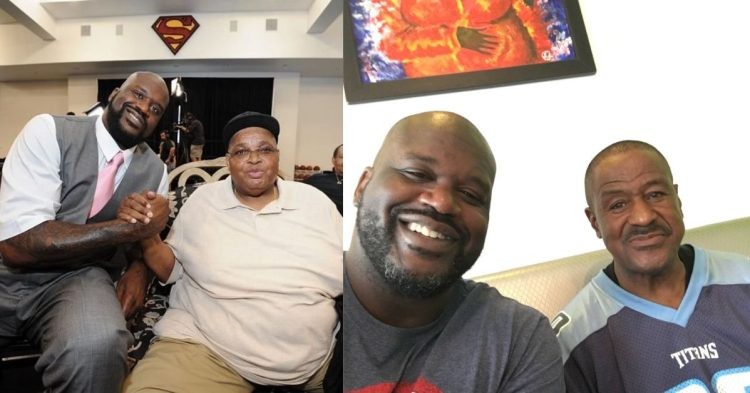 Shaquille O'Neal with his biological and adopted fathers (Credit- Twitter)

Shaquille O’Neal is an NBA legend and a powerful personality on and off the court. He used to be married to Shaunie O’Neal and has 6 children with her, 3 daughters and 3 sons. O’Neal’s mother Lucille never lived with Shaq’s biological father and raised him as a single mother, especially during the initial years.

Now he is both a successful son, father and family man. In conversation with Anas Bukhash, Shaquille O’Neal shared his thoughts on parenthood.

The Los Angeles Lakers great has mentioned his father several times in past interviews. However, he is actually referring to his stepfather Philip Harrison, a man who came into Shaq’s life when he was a child. In fact, Philip was such a strong father figure, coming from an army background, that O’Neal didn’t know that he wasn’t his real father till he was 11 years old.

Joseph Toney was a man from the dark side of the world. He was a criminal and was serving time in prison when his son was born. The charges against him were drug possession and forgery. These are quite serious crimes. Therefore, he was sentenced to 6 years in prison.

When Toney got out, he didn’t try to reconnect with his family. During this same window, Philip came into Lucille’s and young Shaq’s life. He wanted his new family to have nothing to do with a convicted criminal and ensured Toney relinquished parental rights to him

Shaq only recently met his birth father, years after his step-father passed away. He was asked to describe “Joe” in a single expression, “Oh?… Thank you. Yeah for bringing me into the world. We communicate now and then. its just that I’m 50 now so I don’t need a father, so thank you.”

O’Neal certainly showed politeness to Joe despite their estranged past. However, the man who comes to his mind when he thinks about his father is Mr. Philip Harrison.

Philip had a tremendous impact on his wife’s and stepson’s life. He entered their life when O’Neal was only two years old and married his mother Lucille.

Shaq has already mentioned on several occasions, the positive impact Philip made on his life. He taught O’Neal how to be accountable, have financial responsibility, and more. Therefore, the 4x NBA champion was full of emotion when asked to describe Philip.

“Perfect…Yeah, cuz perfect is in the eye of the beholder. A lot of people when you say perfect they think it means flawless. Nah we all got flaws. But in my eyes, he was perfect. He looked at a little kid that wasn’t his and said you’re gonna be a bad man….. He looked at the kid and said you don’t need to be afraid of Patrick Ewing. In three years you gonna be going up against him and you’re gonna kill him…” There is no denying that Philip was a great father. Shaq was also asked what he thought about “all parents” and whether they were “always correct”. Aware of his status in society, he gave a balanced response.

“Why I can’t say. I don’t know. it’s not tricky, it’s like how you asked the question, you said all parents. Now if one parent is incorrect, that messes up our whole theory, so I can’t answer that. But parents love the best that they can. Some have the means to really love and really show it. Some you know, working day to day, you know they have to take care of certain things before they can show love…”

Quite a beautifully worded response from the NBA legend. We can see he has been raised well and with a good value system.