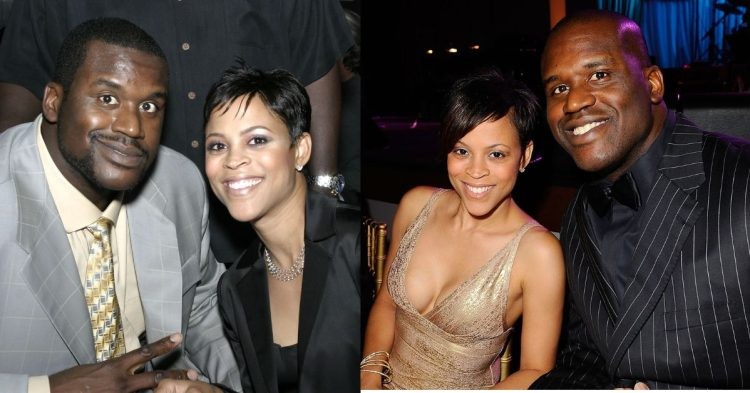 Shaquille O’Neal is widely regarded as one of the greatest Los Angeles Lakers ever. He dominated the league with his unreal strength and size for many years. We are all familiar with his accomplishments on the court. However, the same cannot be said about his personal life.

Shaunie O’Neal is Shaq’s ex-wife and the mother of his children. They were married for almost 8 years, between 2002 and 2011. They soon fell apart and went their own separate ways due to irreconcilable differences between them. Shaq has discussed what went wrong with their marriage in the past. We should want to know if they are on good terms in present times.

After all, they have 5 children together. That means they are still connected as the parents of Shareef, Shakir, Amirah, Myles, and Me’arah O’Neal.

Shaquille O’Neal admitted to cheating on Shaunie with multiple women

Shaq and Shaunie met all the way back in 1996. At the time, he was being traded from the Orlando Magic and on the way to the Los Angeles Lakers to play alongside a young Kobe Bryant. During this time frame, he met Shaunie, who was a film marketer. There was instant chemistry and attraction between the two, who started dating soon after.

Additionally, the couple had their first two children even before getting married. Shaunie knew she was no ordinary woman being the partner of Shaq. She went on to use her entrepreneurial skills to further her personal goal of becoming a successful television reality star.

Shaunie managed to do just that and made quite the name for herself, largely due to her relationship with Shaq. She is the executive producer and plays a role in several shows such as;  Basketball Wives, Basketball Wives LA, and Baller Wives. As we can tell from the names, these are VH1 reality shows.

While both Shaunie and Shaq have become very successful as individuals, the same cannot be said for them as a couple and their marriage. The 4x NBA champion revealed discretely that his unfaithfulness was a huge reason for the marriage ending.

One must wonder what an insane amount of power and money can do to a man and how Shaunie reacted when she found out what her husband had been doing.

Shaunie destroyed Shaq’s car for his behavior after their divorce

It is safe to say that the two of them did not have the most peaceful separation and divorce. Marriages are messy expensive affairs, especially when they turn into a divorce. Even though the Los Angeles Lakers star knew he was in the wrong, simply acknowledging it was not enough repentance in Shaunie’s eyes.

She revealed how and why she decided to engage in the act of vandalizing her ex-husband’s car and how she found out about the cheating on an episode of her reality tv show.

“Our blackberry’s got switched. I went to my baby’s play at school and I was like damn my phone’s going off a lot Just girl, after girl, after girl like ‘baby last night what you did.’ And I went in the arena and I went in that garage, not only did I flatten tires, bust a few windows, I wrote on the hood of his car I cheat on my wife. I ain’t sh*t’ with a knife.”

Shaunie O’Neal Details How She Destroyed Shaq’s Car With a Knife After He Cheated https://t.co/M9cP2ihPLD pic.twitter.com/FrXyTzwOr8

Shaunie even went on to reveal that she followed Shaq as he drove the car with messages written on it, blaring her own car’s horn so the public would notice,”He had to drive that sh*t on four flats, with the messages all around it. I drove right on the side of his ass blowing the horn, cause I wanted people to like see. Beep! Beep! The Whole ride, the whole ride.”

They must have made quite a commotion and people would have been surprised to see the NBA star being chased by an angry wife throughout the streets of Los Angeles. Thankfully, that was the only public violent outburst we observed after the couple fell apart. Both of them claim to still be on good terms despite this scene.

Many years after these incidents, a lot of things have changed in the O’Neal family life. Their parents soon split up. But they still showed all the affection and love in the world toward their children. Shaunie recently got remarried to a man named Pastor Keion Henderson and has now adopted the name Shaunie Henderson. Additionally, it seems that both Shaq and his children did not oppose her decision and chose to support her.

All the children have gone through their own paths in life. In fact, Shaquille O’Neal has famously claimed that “they don’t need another NBA star in the house” and that he would rather his children become doctors or engineers, whatever their passion may be.

Regardless, we know how powerful O’Neal’s genes are, and his son Shareef has decided to follow in his father’s footsteps and try his hand at becoming an NBA player. However, his journey as an athlete has not been easy by any standard. He underwent open heart surgery as a teenager.

Shaq and Shaunie’s son, so young and a star athelete, just underwent heart surgery. Praying for an easy recovery for the young man. https://t.co/bV5Czxxi3J

That crippled his physical development and stamina to a great extent. After all, open heart surgery is worlds apart from the standard fracture and bruise that children are used to. Nonetheless, Shareef is not discouraged and has continued working on his basketball game, just like his old man.

The Los Angeles Lakers acknowledged this and even gave him a spot on the roster for the NBA summer league. He still has a long way to go before becoming a full-fledged player. Shaq and Shaunie may have wanted him to do something different with his life initially. However, all his perseverance and dedication will pay off if he closes the gap and makes it to the league.
Tags: NBAShaquille O'Neal
Previous Post

Rumors of Savannah Marshall Dating “Boyfriend” Hughie Fury – How Did It All Start?