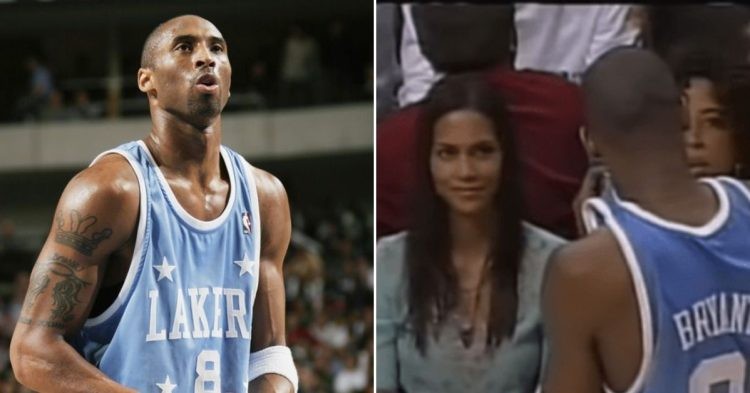 Kobe Bryant was one of the biggest NBA players during his time. It would be an understatement to mention that he was just one of the best in the league, but some fans often include him in the GOAT conversation too. With that said, we have witnessed numerous times when his impact exceeded the basketball court. He has won millions of hearts and an interesting fact is that this happened in an unexpected way back in 2005.

When the Dallas Mavericks played against the Los Angeles Lakers that year, famous Hollywood actress Halle Berry came to watch Kobe and Co. play. In the fourth quarter, the Lakers were leading 95-92 and the NBA world was intrigued to see who would take the win. Despite all this, the cameras were focused on Halle Berry and Kobe, who was standing on the sidelines talking to a referee.

Halle Berry could be seen biting her lips, or “thirsting over” Kobe as some would say. Fans took to Twitter to react to this as questions about whether they dated were being asked. A fan even tweeted, “She wasn’t even trying to hide it lmao,” indicating that Berry didn’t mind if the world saw her reactions to the NBA star.

She wasn’t even trying to hide it lmao.

😂when your face says it all

You can’t blame her. It was Kobe Bryant. ♥️♥️♥️

Wait, does there exist a person who never thirsted on Kobe?!?!?🤣

I think the thirst was mutual

The NBA community believed that Bryant was also thirsty to get Halle’s attention as one even wrote that the “thirst was mutual.” However, as another fan mentioned, Kobe was married at the time. For those who don’t know, the Black Mamba married his long-term girlfriend Vanessa in April 2001. The pair met a few years earlier and their relationship was always rock solid until Kobe’s tragic death in 2020.

Hence, it was highly unlikely for the 5x NBA champ to reciprocate Halle’s interest. Speaking of the actress, she also spoke about Bryant as well. She said to a reporter on the day, “I am a big Laker fan that’s for sure. A big Laker fan. Kobe Bryant and Caron Butler are my favorite players.”

There are no real words to convey the depth of my sadness. Love and strength to Kobe’s entire family and to the families of all who were lost in today’s crash. pic.twitter.com/HvL2m9NXJU

The actress took to Twitter when Kobe passed away with his daughter and six others. His death must have been tough for her to take, especially since he was her favorite player. Kobe is still a huge figure in all of our hearts, and we can only assume that it’s the same case with Halle Berry as well.