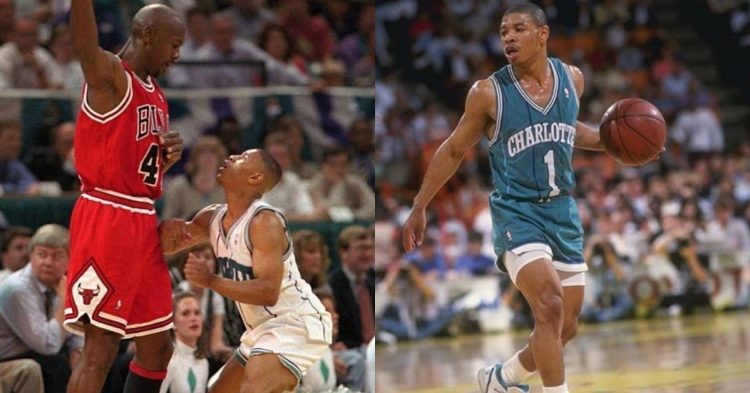 To be an NBA player, height is quite essential. One might say height is the most important quality needed for a player to succeed in the NBA. There have been players who have been towering over their opponents, like Georghe Muresan, who is the tallest player in NBA history. Similarly, there is a player that we have never heard of when we talk about height; Muggsy Bogues.

Bogues was in the NBA for more than a decade. He played for four different franchises during his career. The Washington Wizards drafted him at the 1987 NBA Draft as the 12th overall pick. After that, Muggsy went on to play for the Wizards, Charlotte Hornets, Golden State Warriors, and then the Toronto Raptors.

Muggsy stood at 5 foot 3 tall and still is the shortest player to play in the NBA. With his height, many would not have expected him to end up in the NBA. Throughout his career, Muggsy averaged 7.7 points, 7.5 assists, and 2.6 rebounds in 908 games including playoffs.

His longest spell at a single team was with the Charlotte Hornets. For the Charlotte-based franchise, Bogues averaged 8.8 points, 8.7 assists, and 2.9 rebounds in 647 games. He is still quite involved with the franchise and is often posting images of his time with the Hornets.

One of his biggest achievements despite not managing to win an NBA title would be the gold medal he won for the USA. He represented the country in the 1986 FIFA World Championship and helped them win the tournament. Muggsy had an exceptional time at the tournament after starting all of the country’s ten games. If that wasn’t enough, he was also the leader in the team for most assists and steals.

It seems like Bogues was a player who was an inspiration to young players who do not have the gift of being tall. He may have not won much in the NBA, but Muggsy did not let his height hold him back from making it in the NBA. In 2019, he told Hoopshype, “I just took advantage of what God gave me and learned how to use the body I have to the best of my ability.”