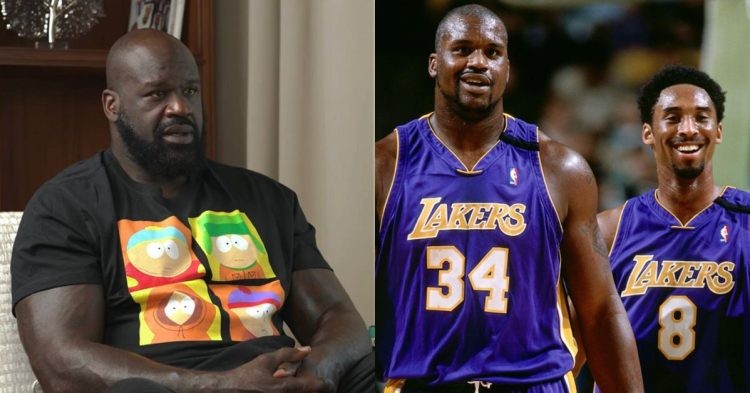 Shaquille O’Neal and Kobe Bryant were one of the best duos to ever grace the NBA. They famously won three NBA titles in a row. Apart from that, the way they won each one of those titles truly left a huge mark on the NBA for many years to come. Both Shaquille and Kobe made sure the entire league feared that partnership, which was indeed the case back then.

However, their partnership turned sour due to many factors. One of the biggest was Shaq’s lack of effort and hard work put into becoming better, compared to Kobe’s famous Mamba Mentality. Shaquille left the LA Lakers and Bryant went on to win two more NBA titles without him.

Although they might have had their fair share of drama, both the players always mentioned publicly that they had respect for each other.

That was the case until Kobe’s tragic passing in a helicopter crash in 2020, together with his daughter Gianna. Since then, Shaquille has been quite open about his regrets about his friendship with Kobe.

In an interview with Anas Bukhash, O’Neal spoke about his late friend. The question for him was what he would say if he could send Kobe an email. Shaquille said, “What’s up…that’s it. Because I know who he is. I know his family. He was with me from 18 and what, 26? Just hi. Yeah a lot of times we have a lot going on and we forget the simplest things.”

O’Neal added, “Men, especially, we have our egos, we’re always going to do this, but as long as you respect each other, it can remain like this… So me and him, I, because I’m the bigger guy, should have communicated more but we were both the same people. After you work, real life kicks in. He has a wife and beautiful children, you don’t have time to be calling me. That’s just how all athletes are but I wish I would have just, ‘hey man how you doing?'”.

Shaq has expressed his regret many times since Kobe’s death. As he said, he feels that he should have been the one to make the effort to start a conversation with his former teammate. Although it could have been something simple, it would have been an interaction that O’Neal would have liked.

He has also mentioned to USA Today in the past, “I don’t want to see anybody go out like that and never to be able to talk to him again. The thing that hurt me was all the stuff that I wanted to say, I hadn’t said it. I never said it.” It seems like Shaquille still had things to say to Kobe but did not get the chance, unfortunately.

The fact that he will not get the chance again is truly heartbreaking. Kobe would have wanted to have a simple and casual talk with Shaquille as well. The 50-year-old concluded by saying, “once they’re gone, they’re gone forever,” as he spoke about two of his biggest losses: Kobe and his sister, Ayesha, who passed away due to cancer in 2019.