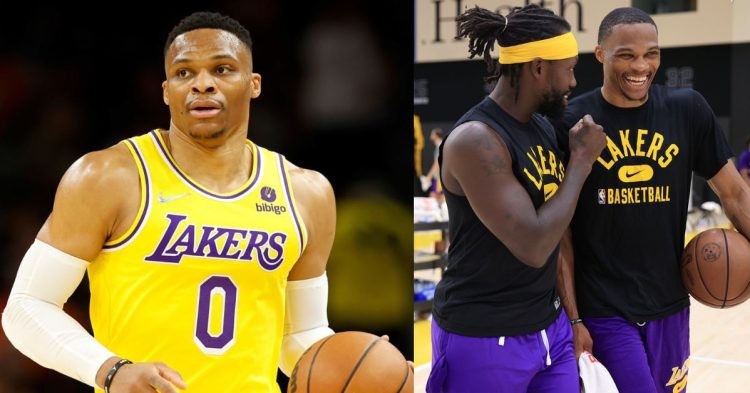 The Los Angeles Lakers seem to be trying everything they can at this point to make the team work. After missing the playoffs in successive seasons, they are looking to get back on track now. The LA Lakers can be the ones with the most titles won in history (17), but things are pointing towards the opposite direction right now.

With the superstars they have in on their roster, they should have at least made to the playoffs. However, LeBron James, Anthony Davis and Russell Westbrook could not lead them to their goal. Russ joined the team in 2021, with expectations from fans and the organization.

However, he hasn’t been able to replicate his Oklahoma City Thunder form. Although Russ has put up decent numbers in his first season, he hasn’t been able to step in Bron and AD’s absence. In addition to that, the Lakers also had a loophole in their defense. This time around, they have filled that by acquiring Patrick Beverley, who is known for his defensive strengths.

Is Russell Westbrook coming off the bench a good idea for the LA Lakers?

Pat Bev’s trade caught the world by surprise since he was Russ’ arch-nemesis for about a decade. Moreover, their pairing just looks unlikely, mainly because of their playstyles. Amid all this, there were reports that mentioned Russ listing his Brentwood property in LA.

However, things have taken a huge turn now. Reports from Bleacher Report have emerged saying that Darvin Ham may be ready to let Russell Westbrook to come off the bench. “HC Darvin Ham is ready to make “whatever difficult rotation decisions” lie ahead for the team,” the post mentioned.

Beverley has also responded to these rumors as he commented on the Instagram post. He said, “Yal be reaching bro. Sh*t is really funny.” His comment strongly suggests that the rumors may be false at the end of the day. Moreover, the media are not the ones in the locker room with the players on a daily basis. It seems like Pat Bev has put behind the beef with Russ by sticking up for him publicly.