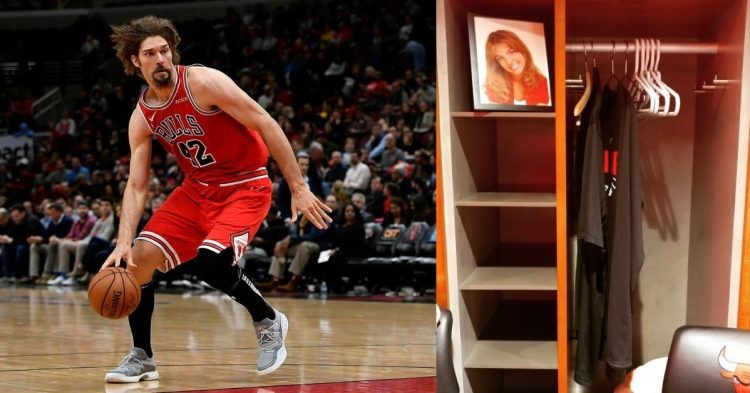 Cleveland Cavaliers' Robin Lopez and Britney Spears photo in his locker, during the 2017 season with Chicago Bulls (Credits- NBC Sports and Forbes)

The Cleveland Cavaliers center Robin Lopez is Brook Lopez’s twin brother, who plays for the Milwaukee Bucks. Lopez in his time at the NBA has switched many teams. From starting with Phoenix Suns to currently playing for the Cleveland Cavaliers. However, he played for the Chicago Bulls from 2016-2019, during which he showcased a portrait of Britney Spears.

Britney Spears is an American singer, dancer, and actress. She started her career as a TV artist with Disney and later rose to fame with her debut album in 1990, “Baby One More Time.” She is one of the most influential and highly popular artists. Britney managed to sell over 150 million records worldwide.

today in 1999 britney spears dropped her debut album, ‘…baby one more time.’ the album is seen as a pillar in the pop landscape, and remains one of the best selling albums of all time with more than 25M copies sold

Sports athletes are highly superstitious when it comes to game rituals. Some try to do anything to follow the same routine before the game to prevent any negative outcome. So did Robin Lopez, he made his luck during the 2017-18 season by keeping Britney’s portrait in his locker room.

today in 1999 britney spears dropped her debut album, ‘…baby one more time.’ the album is seen as a pillar in the pop landscape, and remains one of the best selling albums of all time with more than 25M copies sold

The Chicago Bulls were having a horrid start to the season in 2017. They eventually managed to get their first victory against the Atlanta Hawks. Lopez after the game posted a picture on Twitter of his locker in Chicago’s United Center captioned, “Britney will always be looking out for us guys.”

The Chicago Bulls have been in turmoil ever since Michael Jordan and the legendary roster parted ways after their repeat three-peat season. Phil Jackson’s resigned from the Bulls after a week later, due to a riff with Jerry Krause. Jordan retired after the lockout and key members of the team were traded. The Bulls haven’t been able to get a team strong enough to challenge for the NBA title ever since.

The Bulls, Like Britney’s infamous debut album, couldn’t keep the success going after making history in 1998. Fast forward to the 2022-23 season, and the Bulls are still nowhere close to challenging for a title. The Bulls are 10th in the Eastern Conference, with just 19 wins and 24 losses. The Bulls will be facing the Golden State Warriors in their next match in the NBA.