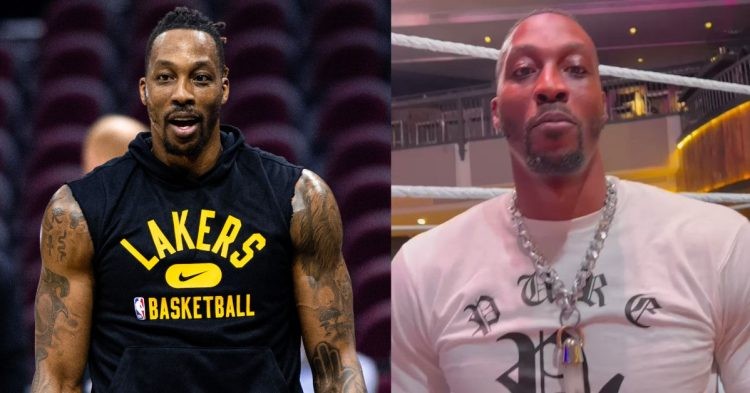 Dwight Howard is a veteran in the NBA and has been around for league for 17 years now. He is an NBA champion and won his title with LeBron James and the Los Angeles Lakers back in 2020. Dwight recently revealed that he has a backup for when his career is over.

He thinks the WWE is a good place to showcase what he is capable of. To those who do not know, WWE is a wrestling entertainment industry and home to several household superstars such as John Cena, The Rock, Undertaker, Roman Reigns, and others. One must wonder why Dwight Howard thinks he is capable of getting into an arena with such people.

Recent NBA fans have not seen a prime Dwight Howard play. He has been a dominant player throughout his career, which initially began in Orlando. It is for this season that he explained why looking for a WWE career there seemed favorable, “Imagine after starting my NBA career in Orlando, If I started my wrestling career in Orlando?“.

Howard had a dominant career from the start and was a significant defensive anchor when he helped the Lakers win. He has averaged 15.7 points, 11.8 rebounds, and 1.3 assists.

These numbers do not clearly indicate how impactful he has been at points in his career. Dwight is an 8 time NBA all-star and has made the NBA all-defensive team 5 times. Additionally, he has won the defensive player of the year award (DPOY) thrice.

The 8x NBA all-star has clearly proved to be a force in the league. However, despite him wanting to continue playing, he is yet to finalize a deal with a team at this stage in his life. That was the reason he started discussing WWE.

There are several rumors that WWE is scripted and that the wrestlers are all just actors. The actions they engage in seem quite bizarre and unrealistic. Therefore, it is looked at for pure entertainment by most of the aware public. Dwight Howard has participated in NBA dunk contests before and clearly has a flair for the show. Additionally, he has quite an intimidating build and can easily be accepted as a  TV-ready wrestler.

We hope he is given a contract by a team in the NBA. if that does not happen and he is serious about this, we wish him the best of luck on that side of the sports world.