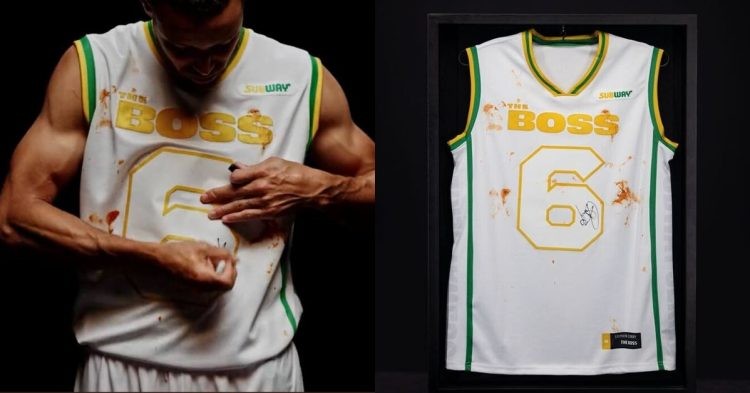 Jerseys have come a long way in the NBA. Apart from being the symbol of teams, they have also become items to collect. Fans are now purchasing NBA players’ jerseys for millions of dollars. Late NBA legend Kobe Bryant‘s jersey has turned out to be the rarest and most expensive jersey. However, this time around, Stephen Curry has sold his jersey online.

Steph collaborated with the fast food brand Subway to create a stained jersey. They decided to auction off the jersey on eBay. In the announcement video, we can see the NBA Champ staining the jersey he’s wearing as he eats a Subway sandwich.

The Subway Twitter account also announced that the proceeds from the auction will be going to Eat. Learn. Play. Foundation. Steph founded the charity together with his wife Ayesha Curry.

Steph even said a few words on his Twitter page about the signed and stained jersey. He said, “jersey stained by yours truly…Had to flip this into a good cause!! All proceeds benefitting [eat.learn.play.]”.

.@subway jersey stained by yours truly…😂😂 Had to flip this into a good cause!! All proceeds benefitting @eatlearnplay 🙌🏽👏🏽 https://t.co/zb0JyX0PSK

This is not the first time the Chef’s jersey has been sold at auction for charity. During the 2020-21 NBA season, Steph faced the Washington Wizards. The Golden State Warriors lost that game 110-107. However, Curry did his thing as usual and made 32 points, 5 assists, and 6 rebounds. The NBA then auctioned off his game-worn jersey on NBA Auctions. The sale proceeds from the jersey went to the Warriors Community Foundation.

Steph and Ayesha have always been huge on charity work. Reports say that the couple was able to provide more than 15 million meals in Oakland during the pandemic. The proceeds from the Subway jersey will go to a foundation that aims to end child hunger.

Oakland is closing schools bc of COVID-19. We support this decision but are concerned a/b the 18,000+ kids that rely on school for 2+ meals daily. @eatlearnplay is donating to @ACCFB to ensure every child has access to the food they need. Join us & donate https://t.co/nDqF7OoO0Z pic.twitter.com/nFp0w1eFqH

They also ensure children have the necessary resources for education and health. Similarly, the Currys have done well with the Eat. Learn. Play. Foundation to help thousands of children.