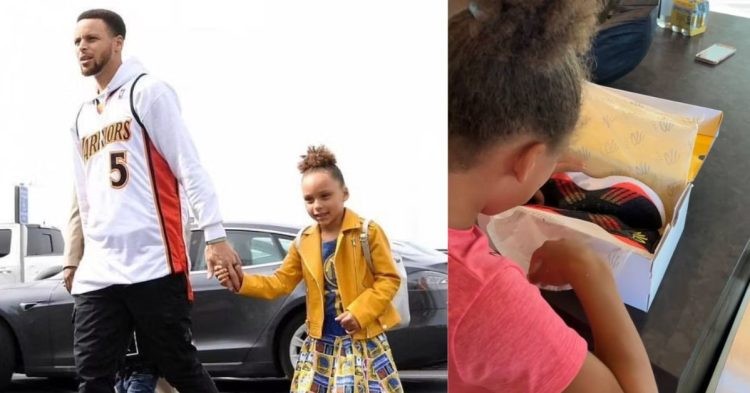 Many players in the NBA boast signature deals that are worth millions. The most popular one we know is LeBron James’ deal with Nike. Stephen Curry also deserves to be in the conversation for the biggest shoe deal.

The Golden State Warriors superstar was initially with Nike. However, his abrupt exit brought the question of why he left them. He joined Under Armour right after leaving Nike. One of the main reasons would be the fact that he got to be the face of the brand, which he did not get from Nike. To be honest, Nike had bigger athletes at the time as Steph was young.

Recently, Stephen Curry collaborated with Under Armour to launch the Curry 10s. It’s Curry’s tenth signature shoe. UA released The first ever Curry signature shoe in February 2015. To reach ten different shoes in just over 7 years is no ordinary feat.

The Chef surprised his daughter, Riley with the shoes a couple of days ago. He posted a video of her reaction on his Twitter page. Together with the video, Steph also said, “It’s only right… Curry 10s for the 10 year old!! Happy Birthday Riley”.

It seems like Steph saved the best gift for the last. Riley’s birthday was in fact on July 19th. However, we can be sure that his daughter wouldn’t mind waiting, who wouldn’t want a Curry 10s right now?

The gift may have a deeper meaning if we take a good look at it. As I mentioned earlier, Steph left Nike for several reasons. Riley was one of the reasons why he had to make his choices. In 2013, Steph had a variety of options to choose from. He called in his daughter to help decide.

“She did the first 3, threw them across the room — and ran over and handed me the spawn. That was pretty much the end of it right there.”@StephenCurry30 reveals the assist that helped seal the @UnderArmour deal + more.

He said, “She did the first 3, threw them across the room…and ran over and handed me the spawn. That was pretty much the end of it right there.” It seems like Steph gifted her the Curry 10s as she played an important role in him building something special.