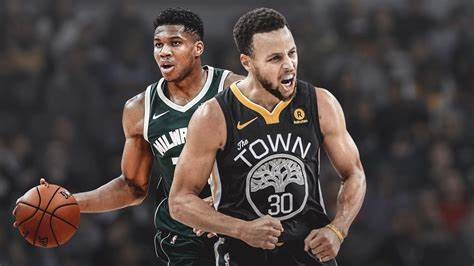 Stephen Curry is a 6ft 3 inch point guard on the Golden State Warriors roster. Steph is known for his pre-game ritual, his shooting accuracy and the goofiest celebrations. Curry has also been an extremely funny guy on the internet. Giannis Antetokounmpo on the other hand is a relatively  bigger man than Curry is. The Greek freak stands high at 6ft and 11 inches. To think that Curry could have a higher vertical than Giannis just does not make sense. However when it is a virtual world like NBA 2K? a lot might be possible.

NBA 2k is one of the most successful games from the 2k Franchise. With the cover of the NBA 2K22 being released, a lot of viral videos of 2k fans calling out the glitches in the game have gone viral. A certain fan took to Instagram to post a video clip from the game which has now gone viral.

The fan was playing a regular NBA 2K matchup between the Golden State Warriors and the Milwaukee Bucks. The fan chose to play as the Warriors. The player formulated an alley-hoop drunk play. What’s funny about the situation is not the play but the players involved. The clip saw Stephen Curry jumping over Giannis Antetokounmpo to land an insane dunk. Now if this were to happen in near-life, Giannis would probably stop balling considering Stephen Curry is half his size. But in the world of 2K? Anything is possible. This video caught the eye of Stephen Curry and King James. Curry left a rather hilarious reaction on the video that read.

Finally got my revenge from the all star game!!!!

What Happened Between Giannis And Steph At The All-Star Game?

The All-Star game is the one game the best of the best come together for a match filled with Fun and flashy moves. In 2017, the NBA All-Star game took place in New Orleans at the Smoothie King Center. The Western Conference defeated the East and Anthony Davis was crowned the All-Star NBA MVP.

However, there were two moments where Giannis Antetokounpo decided to poster Stephen curry and boy was it bad. Giannis had no mercy when he pulled off two incredibly flashy dunks over Curry. It might have even been three poster dunks but Steph managed to wisely get his way out of the third one.