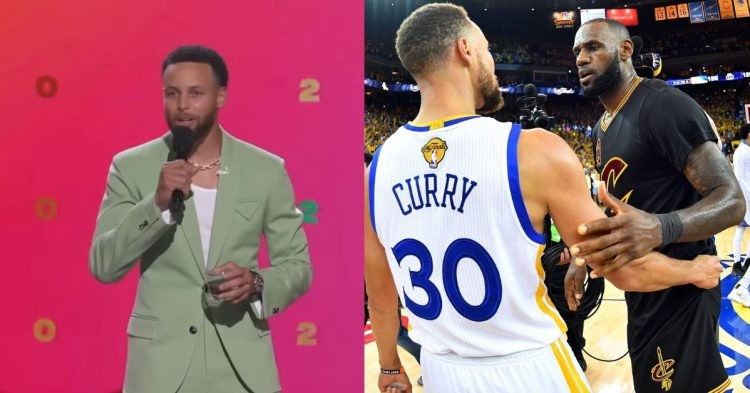 The ESPY awards are conducted to recognize achievements in sports. Previously, ESPN took charge of the event, but now ABC conducts the ceremony each year. Last year, famous actor Anthony Mackie was the host of the event. This time around, NBA Champ Stephen Curry went on to host the event.

ABC held the ceremony at the Dolby Theatre in Los Angeles on 20th July. The event saw many sports personalities receiving awards and being credited for their successes in their respective fields. However, what caught the attention of many would be Steph‘s monologue.

He decided to go for LeBron James when giving his opening speech. Back in 2007, LeBron was the first NBA player to host the show. Moreover, Steph has been only the second player to do the same.

The Golden State Warriors star said, “I am the second NBA player to host this awards show, which is kind of crazy to think about,” Curry said. “LeBron James, he hosted this award show back in 2007 after losing in the NBA Finals. So yes, you guessed it, this feels better.”

“I’m the second NBA player to host this award show. LeBron James hosted this show back in 2007 after losing the NBA Finals. So yes… yes, this feels better.”

Steph Curry came out with the LeBron jokes early 🤣pic.twitter.com/FZdx4Ze0vP

He was brutal to troll LeBron for hosting the event after losing in the NBA Finals. LeBron was with the Cleveland Cavaliers back then. The San Antonio Spurs completely dismantled the Cavs and wrapped up the title in just four games. LeBron was the best player on an average team. He averaged 22 points, 7 rebounds, and 6.8 assists during the finals that year.

We know how Steph ended his season this year. He won the title once again with the Warriors and took home the Finals MVP while he was at it. This was his fourth title with GSW. He tied with LeBron this year for the most championships among active players.

When you compare Steph’s recent season to LeBron’s in 2007, Steph’s would obviously look better. He has just come off a title win while LeBron’s team lost it embarrassingly. And Steph couldn’t resist taking a dig with this.