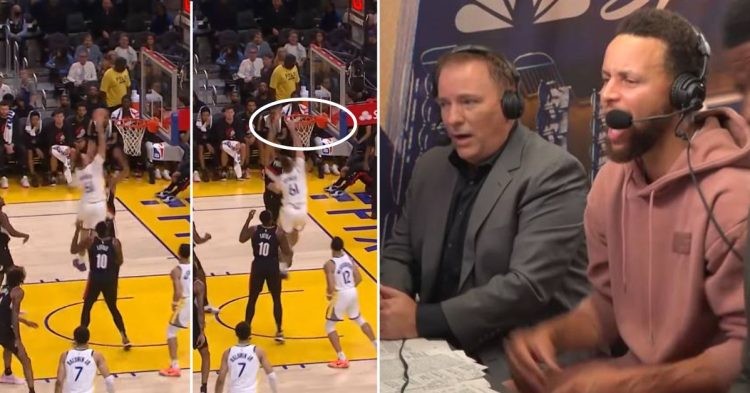 The 2022-23 NBA season is just around the corner and we’re currently in the preseason stage. The most recent game was when the Golden State Warriors played against the Portland Trail Blazers. The defending champions took the win as the game ended 131-98. The game didn’t have the usual stars, Stephen Curry, Klay Thompson and Draymond Green.

However, another player seemed to have caught a fair bit of the attention despite that. It was the new face on the block for the Warriors, Pat Spencer. In the third quarter of the game, Pat dribble past two Portland players with ease and hammer down the ball at the rim. This seemed to have caught Steph off guard as he looked speechless. The video was posted by NBC Warriors.

Curry was did not feature in the game and was in the commentator’s box. As he witnessed the dunk live, the 4x NBA champion could not utter a word due to the shock he was in. Since then, fans have taken to Twitter to react to the event. One wrote, “I mean it was Ight.”

I mean it was Ight 🙁

Numerous fans have expressed their disappointment and this may indicate that the commentators were exaggerating how good the dunk was. Another fan also made a mock of the hammer comment.

Although it may seem like Pat’s dunk wasn’t that great, we have to remember that he was a lacrosse player right before this. He played the sport during college, for the Loyola Greyhounds. However, he decided to have a go at a professional basketball career and realized that he found another sport he was good in. Earlier this year, the GSW board signed him to a Exhibit 10 contract, where he receives a minimum salary.

Being a lacrosse player for majority of his sporting career, and making highlight reels on highlight reels in front of the best on one of the biggest stages in the world is no ordinary feat. The main reason why Spencer shocked Curry was because the latter did not expect the rookie to have that in his locker.

Moving on, some fans of the Warriors’ family have also expressed their excitement after seeing the 26-year-old play. One wrote, “Your honor, Pat Spencer is simply built different.” While another hilariously mentioned, “Pat Spencer may look like my local Dunkin’ Donuts cashier, but he can HOOP bruh.”

Pat Spencer may look like my local Dunkin’ Donuts cashier, but he can HOOP bruh 🔥🔥🔥

Spencer played for the Capital City Go-Go in the G League during the 2021-22 season. During this time, he averaged 7.5 points, 2.3 rebounds, 2.1 assists, together with 14 minutes per game. Although his stats may not say that he’s a standout player, it seems like he’s working hard to play alongside the best in Steph Curry. And at this rate, he may well be able to achieve that.