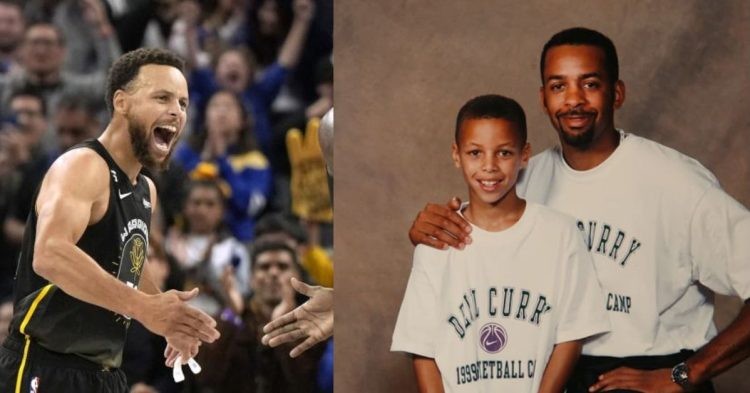 Stephen Curry on the court and with his father Dell Curry as a child (Credit: Twitter)

Golden State Warriors superstar Stephen Curry is popularly nicknamed the “Baby Faced Assassin“. Most of us are familiar with NBA players being given titles for accomplishments in the game. Michael Jordan was known as Air Jordan or Black Jesus, and LeBron James as the Chosen one or King James.

In any case, those names might just sound much cooler and more impressive compared to Curry’s. We should wonder more about whether there is a  particular significance behind being called the Baby-Faced Assassin. However, we shouldn’t really be surprised. NBA fans find the most creative and unique names to honor their favorite athletes with.

What are the various other nicknames for Stephen Curry?

Warriors fans will certainly be able to answer those questions easily. Chef Curry and the Baby-faced assassin are the most popular ones. We know Chef Curry is a pun on his name. Here is the significance of his other nickname.

Steph transferred to Charlotte Christian high school in 7th grade and we all instantly associate that to be his high school. However, he also played basketball for a team called the Queensway Saints when spending a year in Toronto.

To those who are confused, Dell Curry was playing for the Raptors at the time and his wife Sonya decided to move the family there to be with him for his final year there. She enrolled Steph and Seth at Queensway Christian College, a tiny school in the locality. Steph and Seth soon made the Queensway Saints into a top-tier team that could defeat other larger highschool. A former coach revealed that the baby-faced assassin was born during one of those games.

On this date 10 years ago, Stephen Curry made his Warriors debut! pic.twitter.com/eAtZiDVJ1s

Steph and the team were down 6 points with around a minute left in the game. However, at the moment of reckoning, he simply said, “We’re not losing this game. Give me the ball“. Curry made two instant three-pointers and changed the tide of the match. His team ended up winning that game.

The baby-faced assassin can be considered an alter ego that represents the two sides of Steph. On one hand, the baby refers to his innocent, kind cute side we all see. On the other, the assassin refers to the cold-blooded killer who usually emerges when opponents are trying to intimidate him.