“I’m not the shooter I am without him”: Stephen Curry Reveals Why He Had Klay Thompson’s Jersey in the MSG Locker Room 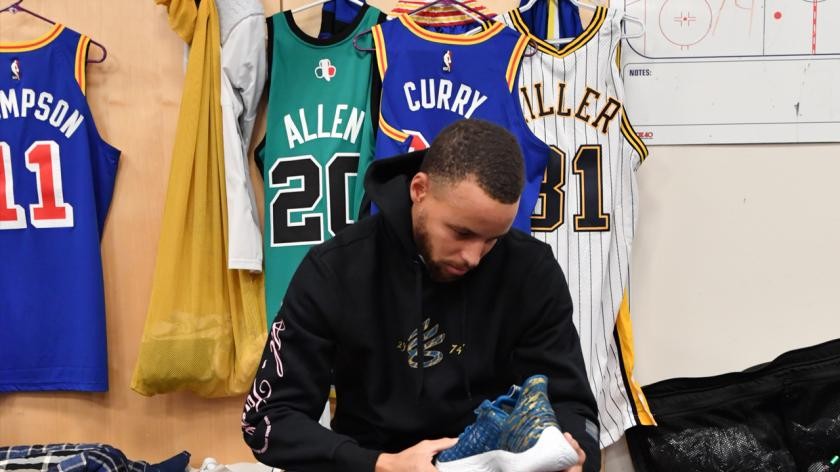 Stephen Curry and Klay Thompson are two individuals but melded as “Splash Brothers” for a reason obviously. Stephen Curry was selected in the 2009 NBA draft, while younger “brother” Klay was drafted in 2011 by the Warriors. Though both were unable to win the Rookie of the Season award in their rookie years, they both together make a very explosive offensive power that delivered 5 consecutive Conference Championships and 3 NBA titles between 2014-2019.

Team and fans certainly love the Steph and Klay pair, but they both have huge respect and love for each other also. When Stephen Curry was on verge of setting the NBA record for most three-pointers in the regular season, Klay was not at Madison Square Garden. But Steph kept his jersey in his locker at MSG while breaking the record. Mark Haynes of clutch point reported Steph’s exact word for this gesture,

Stephen Curry on having Klay Thompson’s jersey in his locker at MSG the night he broke the record:

“It was amazing to honor him even though he wasn’t there. To let him know I’m not the shooter I am if I don’t get to see Klay every single day doing what he does.”

Truly the splash bros are inseparable. Klay also congratulated Steph on his massive achievement. Recently, when Klay was playing after more than 30 months, Stephen Curry and the whole Warriors team showed their love wearing his jersey while entering the game and celebrating “Klay-day” at Chase center.

Also Read:  “That was to shut them the f**k up”: Julius Randle Tries to Justify the Thumbs Down Gesture to Fans

Impact of Stephen Curry and Klay Thompson on NBA

Golden State Warriors were dominating the NBA from 2013 onward since experienced and elite defender Andre Iguodala joined the Warriors mission. He said while joining the team that he sees huge potential in the young Warriors team. The Warriors proved him right very next season with help of the “splash-brothers” offense.

NBA world erupted with the number of attempts taken and efficiency for the three-pointers by this backcourt duo. It literally changed the complexion of the game. Other teams also change their age-old big men strategy to a small lineup and players started taking more 3s every game.

They both complimented each other with their plays on-court. Even they stand 1st and 2nd in most three-pointers made in a single game. Curry broke Kobe Bryant’s record with 13 three-pointers in a game. Klay later broke in the start of the 2018-19 season with a tally of 14 three-pointers. Steph was 1st one to congratulate Klay on the achievement.

Klay is following Steph’s footsteps, scoring his 1800 three-pointer against Cleveland Cavaliers in his long-awaited return from an ACL injury. Klay Thompson is second fastest (615 games) to do so, while Stephen Curry is the fastest one with 545 games.

Also Read: “I always respected his ability to get a teammate involved”: LeBron James Heaps Praises on Oscar Robertson After the Disappointing Loss to Grizzlies

“It’s been a lot clear how we want to play basketball”: LeBron James Reflects on the Disappointing Loss to Memphis Grizzlies