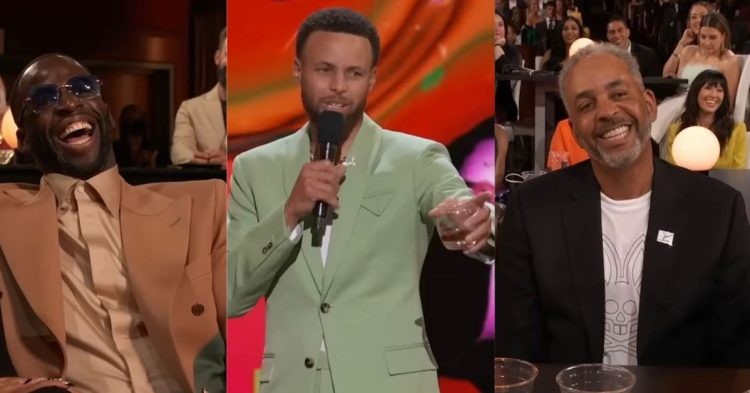 Stephen Curry is one of the funniest NBA players. He always manages to have fun on the court even during a serious game. Despite that, he does his thing in style and always comes out on top.

This year, the GSW star hosted the 29th edition of the ESPY awards. He became only the second NBA player ever to host the show, after LeBron James, who he also viciously trolled. The event had Steph talking about the finest in all of the sports. He went on a trolling spree and the audience loved every bit of it.

Stephen Curry tickles funny bones as the host of ESPY 2022

When Steph started his monologue, he wasted no time. He went for LeBron right after introducing himself as the host. He said, “I am the second NBA player to host this awards show, which is kind of crazy to think about,” Curry said. “LeBron James, he hosted this award show back in 2007 after losing in the NBA Finals. So yes, you guessed it, this feels better.”

That would’ve hit a wound for LeBron as that was a year to forget for him. In 2007, the Spurs wiped the series clean in the finals with a 4-0 win over LeBron’s Cavs. Luckily for LeBron, Steph didn’t stop there. When talking about his achievements this year, Steph went for Draymond Green. He said, “an amazing year but somehow you know I’m still getting overshadowed by Draymond Green’s podcast.”

Steph’s hilariously correct if we think about it. The man just won a ring and a Finals MVP and DG’s podcast gets more recognition than him. Seems like Steph really is underrated, and he knows it too. In the end, Curry showed love for his Golden State counterpart and said, “I can’t even be mad at it, it’s a great show, make sure y’all like and subscribe.”

If you thought Steph was going to go easy on his dad, you thought wrong. The Chef said, “there’s so many people that have worked hard to make this thing work, but a special shoutout to the team that put Dell Curry’s outfit together.” He then asked, “is that a suit with a bunny rabbit t-shirt on it?” Steph hilariously implied that his dad’s outfit was bad and said that Dell Curry won’t be coming on stage.

“After celebrating 3 kids birthdays in two weeks, I finally understand why Tom Brady keeps coming back to work… He’s is the only guy I know who’d rather get hit by Aaron Donald than hang out with a supermodel.”

Steph didn’t let Brady go even after that. The 34-year-old claimed, “He’s is the only guy I know who’d rather get hit by Aaron Donald than hang out with a supermodel. We all make choices sometimes you don’t understand some of them.” Curry trolled the Buccaneers QB after he decided to return from retirement just 40 days later.