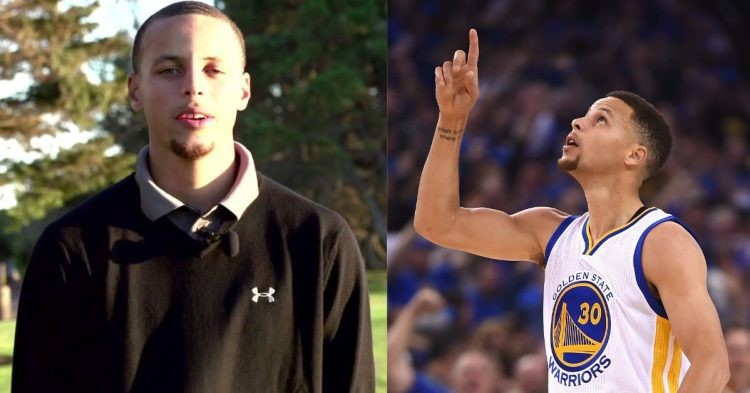 Stephen Curry is considered the face of the NBA along with LeBron James and is the star point guard for the Golden State Warriors. We are all familiar with his abilities on the court and his accomplishments. He is a 4x NBA champion and widely considered by many to be the best three-point shooter the game has ever seen.

Religion and belief are something that is very personal to an individual. Some do not believe, while others have strong faith and belief. A lot of this is decided by a person’s family and surroundings. With that being said, we should wonder what religion Stephen Curry follows.

Steph Curry and his younger brother Seth are both children of former Charlotte Hornets Star Dell Curry. Many of us didn’t know much about Steph until he joined the Warriors and soon turned them into contenders. He studied at the “Charlotte Chrisitan school”.

We think that name alone proves how religious Stephen’s upbringing was and explains why he still firmly believes in God and Christianity to this day. In fact, his religiousness and belief are so strong that he has placed them on his handle on social media before everything else.

Those who are familiar with the bible will know what Phillpians 4:13 refers to, “I can do all things through Christ which strengtheneth me.”

Powerful words indeed. Steph has even spoken about his faith during important moments in his life like his 2016 MVP award ceremony. This is one of the biggest platforms he has ever spoken and he used this opportunity as he saw fit.

“You don’t have to live anybody else’s story. People make it seem like you have to have a pre-requisite or a crazy life story to be successful in this world. But the truth is, you really don’t. It doesn’t matter where you come from or what you have or don’t have. What you lack or what you have too much of. But all you need to have is faith in god and an undying passion. For what you do or what you choose to do in life.”

People are free to have their own opinions on whether God exists or not. However, there is no denying that belief and faith are some of the most powerful and real things in this world.
Tags: NBAStephen Curry
Previous Post