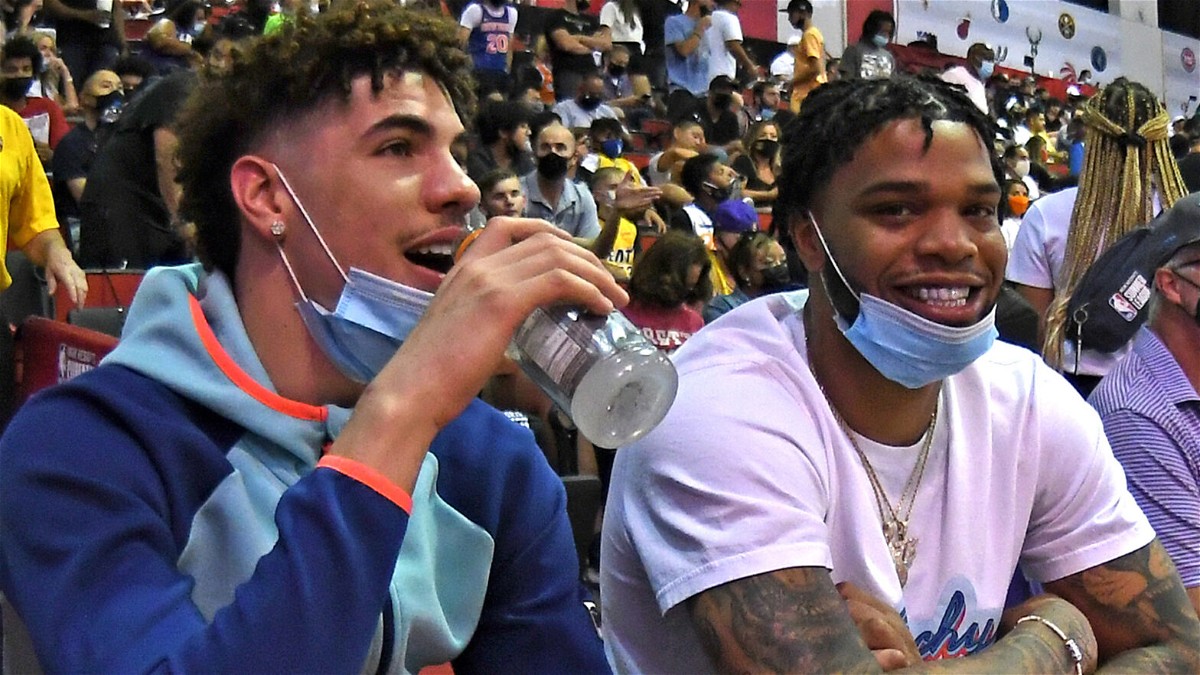 The 2021 NBA Summer League has been action-packed so far. As of Day-3 of the 75 game event, we have some amazing performances and incredible highlights from the rookies. From flashy playmaking to sky-high alley-oop jams, the rookies can do it all. It was only a matter of time before the big league stars showed up to see the fun for themselves. It is no surprise that some big names were seen courtside vouching for their teams at games.

Kawhi Leonard, Paul George, Reggie Jackson, Terrence Mann, and Luke Kennard of the Los Angeles Clippers were courtside at the Summer League. The Clippers starters showed up to support their rookies during the LA Clippers vs Portland Trail Blazers game. This was the first time anyone had seen the Clippers all together after the Western Conference Finals when their playoff run ended. The widespread falsely created drama about the Clippers was finally put to rest.

What many noticed is that Kawhi Leonard wasn’t wearing any kind of knee brace after his ACL surgery. The said surgery was announced on July 14, which is less than a month of recovery. It is a good sign that Leonard was without a brace but there’s still no news about when he will resume playing. Keon Johnson, Jason Preston, and BJ Boston are the Clippers’ 3 solid rookies that could very well become NBA stars.

Back in the building supportin’ the boys. pic.twitter.com/t8ulV1CaB9

The Antetokounmpo brother were on family business supporting their youngest sibling

Current NBA Champion Giannis Antetokounmpo and brothers Kostas and Thanasis Antetokounmpo were spotted at the Summer League. Their youngest brother, Alex Antetokounmpo, made his debut for the Sacramento Kings 6 days ago against the Washington Wizards. Lucky for his brothers, they could see Alex get his first pro win as the Kings beat the Wizards that game.

Giannis, Thanasis and Kostas pulled up to Summer League 👏 pic.twitter.com/7qQnY91veH

LaMelo Ball arrives in style for the NBA Summer League

LaMelo Ball sure knows a thing or two about making a big entrance. He did exactly that in Vegas when he arrived in a private jet to watch his brother LiAngelo Ball and Charlotte Hornets play. LaMelo got onboard Puma’s private jet heading to watch the Summer League games in person. The 2020 Rookie of The Year posted his trip on Puma Basketball’s Instagram page. The Charlotte star was also seen rocking his unreleased signature shoe Puma MB1 courtside at the Hornet’s pre-season opening game.

LaMelo Ball debuts the PUMA MB1, his first signature shoe with the brand at NBA Summer League 🛸 (via @nickdepaula) pic.twitter.com/Q45VPActzm