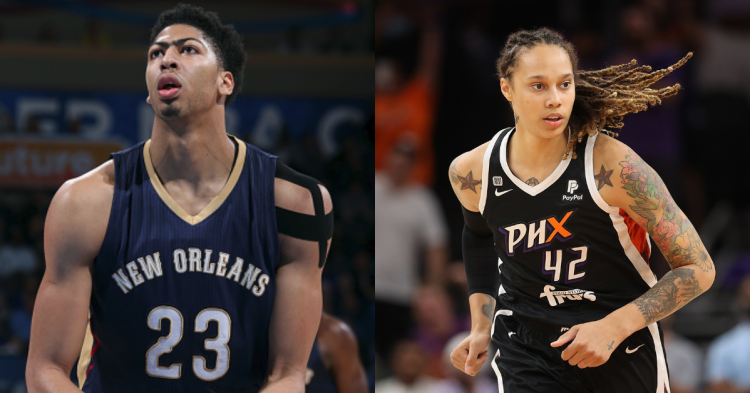 Brittney Griner has been in the limelight lately. Her arrest in Russia came after airport officials caught her with vape cartridges. The cartridges contained hashish oil, a form of cannabis. After a long time, the Russian government sentenced her to 9 years in the country’s jail.

Many across the world believe that Brittney was done wrong by Russia. Not just the NBA community, but everyone else has come together to support her too. However, it seems as if it would be of no use as the country is not budging to any requests, even from the US government itself.

There were many NBA stars that came and spoke out for Griner. LeBron James, Stephen Curry, and even former players. One that did not was Los Angeles Lakers superstar Anthony Davis. You may think there is no deep reason for it, but it turns out that there is. Let’s look at Brittney Griner’s close relationship with Anthony Davis.

The WNBA player’s marriage with Glory Johnson ended in less than a month, who played in the same league. Reports say that police arrested the pair on April 22nd, 2015 on assault and disorderly conduct charges. Griner then filed an annulment of the marriage.

Just after a few months, AD went public about his relationship with Brittney. In an interview with TheNewsNerd, he said, “She is everything to me… We have an amazing relationship and have so much in common. We even wear the same size clothes and shoes so sometimes she borrows a shirt or two from me.”

The pair’s relationship went on for a while. This prompted rumors to emerge, saying AD and Griner were in fact engaged. We can take a look at his tweet two years prior, when rumors of the same emerged. He said, “Whoever made that rumor up about me being engaged is corny. I am NOT engaged people!!”

Whoever made that rumor up about me being engaged is corny. I am NOT engaged people!!

Both the basketball players were not seen in public together at any time. They chose to keep their relationship private and did well with it. It is not known where they broke up but Brittney’s next relationship was with Cherelle Griner. The pair tied the knot in 2020 after BG proposed in 2018. As for Davis, he met his now-wife Marlen P a while after his split with Griner.