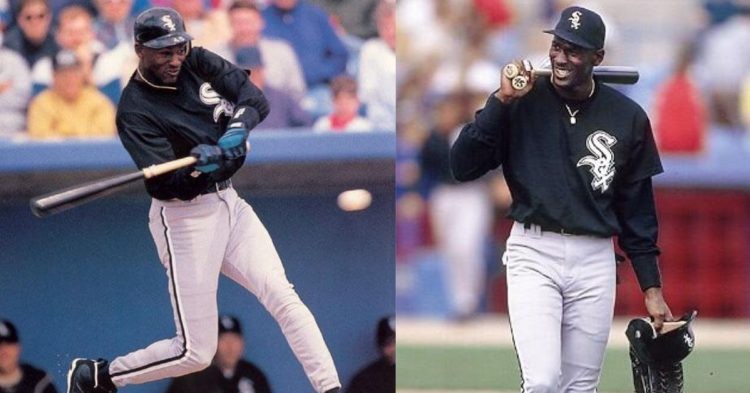 The NBA has seen many world-class players. There have been players who have had a lasting impact that will be visible for decades to come. Examples of those players would be Michael Jordan, LeBron James, Kobe Bryant, and Stephen Curry.

Although we have seen so many exceptional basketball players, there aren’t many who were brave enough to immediately switch sports. Now changing what you do for a living out of nowhere switches up everything. One player that was not afraid of that was the legendary Michael Jordan.

MJ was an exceptional basketball player, he is the greatest player in NBA history. The impact he has had on the sport, both on and off the court tells us how great he was back in the day. Jordan won 6 titles with the Chicago Bulls, being a crucial part of all of those wins. He is one of the very few players to come back from retirement. In 1994, the American retired from basketball at just 29.

“I just feel that I don’t have anything else for myself to prove.”

Jordan’s decision to retire at such a young age was overshadowed by the fact that he chose to become a professional baseball player. He was the best NBA player at the time and the most famous athlete in the world. The news shocked every single person that heard it.

Not sure I knew that Michael Jordan almost played baseball in the White Sox organization in 1993, too. Found this in the Sporting News archives. pic.twitter.com/RGbWbITT6i

However, reports emerged later on mentioning that he chose to retire from the Bulls due to his father, James R. Jordan, Sr’s death. He chose to honor his father by chasing his dream; to play baseball professionally. On February 7th, 1994, His Airness signed a Minor League Baseball(MLB) contract with the Chicago White Sox.

How good was Michael Jordan at baseball?

The Black Cat tried his hand at a completely new sport. Despite his numbers, people knew that what MJ was doing was special. He first started with spring training games that year. No matter how much of a legend you are, the speed that an average MLB pitcher throws at will surely be too fast.

One of his more memorable moments during his baseball career would be his 2 against the Cubs in an exhibition game. Although he was used to hitting buzzer-beaters at the United Center, it must’ve given him a bit of motivation to improve in a new sport.

“I don’t think I’ve proven I can make the team. That’s just being honest. … But I’m not going to give up. I’m trying to squeeze five years into eight weeks. It just hasn’t happened the way I wanted it to”, Jordan told reporters that year. His comments remind us of the type of individual MJ was as a whole. He knew that the White Sox were not going to gift him a place on the team and he was ready to work hard for it.

In 1994, Air Jordan played for the Double-A Birmingham Barons, affiliated to the White Sox. In 127 games, he hit .202 during his 497 plate appearances. He also only had a .289 on-base percentage. To make things worse for him, he was caught stealing 18 times that season. However, he may have made up for it with the 30 stolen bases.

MJ brought his elite mentality with him to the MLB

Michael Jordan’s numbers may be decent for a first-timer, but it wasn’t enough for him to have a baseball career. We have to keep in mind that he was 30 at the time. To make it in the MLB as a rookie at that age, you need to have some exceptional numbers. Jordan gave it another try the next year in the Arizona Fall League. That year, he finished with a .252 average in 123 ABs.

His second year wasn’t that impressive as well. However, the fact that he went for another attempt should tell you all about him. No player would go out on the field and put himself under pressure as he did. Moreover, his manager, Terry Francona spoke to ESPN about Michael Jordan.

Michael Jordan hitting a triple in the Arizona Fall league with his coach, Terry Francona on the mic 🔥 pic.twitter.com/VOSVs7q15v

He said, “I remember once, we’re up 11-0 against Chattanooga and Michael doubles. Then he steals third! I’m pantomiming an apology to Pat Kelly, the other manager, and he’s laughing. After Michael comes in, ‘I’m like, ‘What are trying to do, get us killed?’ And he says, ‘Well, in the NBA, when you’re up by 20, you try to go up by 30.”

The fact that he tried to go for the kill should tell the hunger that MJ had. He was no ordinary player and individual and he always knew that you had to increase the difference between the two teams when playing, no matter the sport.

“I do think with another 1,000 at-bats, he would’ve made it. But there’s something else that people miss about that season. Baseball wasn’t the only thing he picked up. I truly believe that he rediscovered himself, his joy for competition. We made him want to play basketball again”, Francona also claimed.” MJ came back to the NBA after 17 months with an iconic statement, “I’m back”.

As his former manager said, it seems like Jordan had to regain the love he had for competition. The NBA was always his home, and he was never going to leave. He did not have anything to lose when he chose to play baseball, but what is for sure is that he earned the respect of all after he did it.

Moreover, we NBA fans should be glad that he came back to give us another 3-peat with the Chicago Bulls (1996, 1997 & 1998.) This was the second time he did so and those 3 rings truly cemented his status as a GOAT.