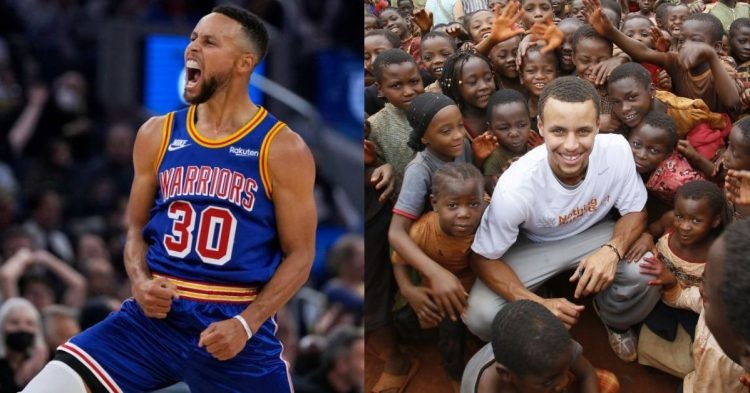 Athletes in the NBA nowadays make millions even when they are not playing for their respective teams. The teams pay the players well to perform under the immense pressure. With the money they have earned, players have managed to contribute to the society with their charity work as well. Stephen Curry makes it onto the conversation as one of the most charitable NBA players in the world.

Congrats to @StephenCurry30 and the entire @warriors org. for winning the @NBA title! We’re proud to be part of Stephen’s @eatlearnplay team, working together to unlock every child’s potential. Stephen, you’re an MVP on and off the court! #NBAchampions2022

Steph has been one of the best players in the world for a few years now. He has made sure to contribute to the society. One of his biggest work when it comes to charity will be his Eat.Learn.Play Foundation. The Golden State Warriors star has made sure to provide children with food, water, education and every other basic need.

Stephen Curry founded the Eat.Learn.Play Foundation with wife Ayesha in 2019

The aim of his foundation is to pave the path to the future of these children. And if we’re being honest, Steph has been doing more than that. He started the foundation with his wife Ayesha a few years ago. Since then, the couple has managed to give back plenty to the community.

One of their biggest achievements would be distributing about 15 million meals throughout Oakland. The foundation collected the meals from farmers in the area before distributing them. According to Forbes, the Currys worked together with Lineage Logistics during the pandemic to help those in need.

The foundation’s most recent work was just completed a day ago. Steph worked with Rakuten to help the Garfield Elementary School reopen its library after 10 years.

.@garfieldoakland was w/o their library for more than 10 yrs… proud to work with @rakuten and @eatlearnplay to provide all the supplies they need to open their library this fall!! @Rakuten helping w/ Back to School shopping and in The Town doing good. You LOVE to see it!! 📚✏️ pic.twitter.com/V8jMmx6uiM

“[Garfield Oakland] was w/o their library for more than 10 yrs… proud to work with [Rakuten] and [Eat.Learn.Play] to provide all the supplies they need to open their library this fall!! [Rakuten] helping w/ Back to School shopping and in The Town doing good. You LOVE to see it!!”, he said.

What other charity work has Steph Curry done?

Back in 2012, the 2022 Finals MVP winner visited Tanzania to deliver anti-malaria nets to the people. He conducted a program known as Nothing But Nets as he promised to donate three nets for every three-pointer he makes. Curry said, “I donated three nets for every three-pointer I made during the 2012-13 season, and now every time I hit a three I will think of the families I met in Tanzania.”

“As a father, I do everything I can to keep my daughter safe. The parents I met in Nyarugusu do the same, but they need help to protect their children from malaria. That’s why I’m challenging all my fans to get involved and support Nothing But Nets,” Steph continued.

In addition to that, the 34-year-old also offered a donation of about $118,000. The money went to those who were affected by Hurricane Harvey in Texas. Apart from that, Steph also publicly supports NBA Cares, Victory Over Cancer and many more charities. It is good to see such a huge NBA star be rooted to the ground to help those in need whenever he can.