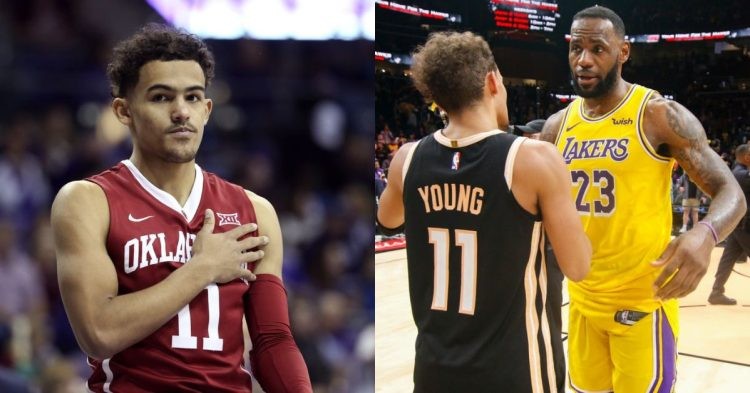 LeBron James is an NBA superstar and a 20-year veteran in the league. He has won 4 NBA titles throughout his career and has seen several generations of players come and go. Trae Young is the point guard for the Atlanta Hawks and an upcoming star in the league. He joined the league in the 2018 draft, the same as Luka Doncic.

Trae is only 24 years old. King James, on the other hand, is 37. Considering that there is a huge age and generational gap between LeBron and Trae, one must wonder what their history is and how they found out about each other.

That is the concept of falling on one’s radar. We already know it was easy for Trae to find out and hear about LeBron James. This was because the King was a sensation and the public hyped him up from the day he stepped on the court. In fact, there was pressure on James even before he played his first NBA game.

Thus, the greater and more important question would be, “When did LeBron find out about Trae Young and who he was?”. We need to look closer into their past in order to find out.

Trae Young has already revealed to have met several NBA stars like Kevin Durant and LeBron James back when he was a child. However, that is just a common everyday interaction between a fan and an NBA superstar. It would interest many people to know that Trae was given a lot of exposure to NBA players and basketball largely due to his father.

Rayford Young only played basketball at the collegiate level. Be that as it may, he still had several connections in the NBA world and was frequently in connection with various people in the league. Thus, it is no real surprise that Trae also went on to show a love for the game and a desire to play at the highest level.

Trae Young attended college at the University of Oklahoma. He soon emerged to become a star on the team and a hyped-up draft prospect. It was at this time when even LeBron James acknowledged his abilities. He was asked what he throughout about Young and whether he should decide to apply for the draft.

“What decision? That ain’t no decision. That’s like saying am I waking up this morning, brushing my teeth, ain’t no decision? You better go pro“. It seems the media were deliberately attempting to get LeBron to say something negative about Trae. The next question was along the lines of what kind of adjustments the King thought Trae should make to get to the next level.

“Uhm how much money he gonna spend monthly, how much you gonna save? That’s the only adjustment he got to worry about.”

Just as predicted, Trae made his way into the pro leagues and has further developed his game. Both these stars have a mutual sense of respect. However, they have not faced each other in the postseason as LeBron took his talents to the Western Conference when Trae was drafted into the East.