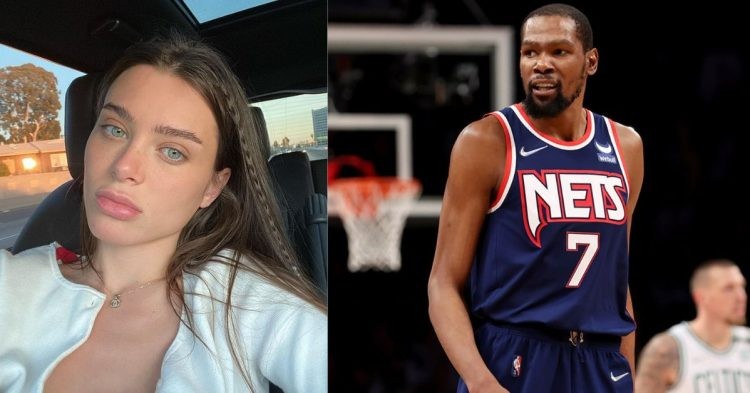 The new 2022-23 NBA season is just about to begin and trades are taking shape. One player that confirmed his team is Kevin Durant. The Brooklyn Nets announced recently that they came to an agreement with KD for him to play for them in the future.

With Durant’s recent appearance in the headlines, there also have been other news from reports. Many sources claim that Kevin Durant might have had a relationship with adult star Lana Rhoades.

In the recent episode of Impaulsive, the hosts, Logan Paul and Mike Majlak revealed the name of the father of Lana’s child. Mike said, “She’s doing well, she’s got a baby with a big-time NBA player”. For that, Charlamagne asked who the player was. Mike said a name but the channel bleeped it completely.

Is Kevin Durant the father of Lana Rhoades’ baby?

Many fans have started to speculate that it might be KD with the short length of the beep over Mike’s voice. Although that player could be anyone with a short name, it could well be Durant.

Last year, Rhoades revealed that she went on a date with a Brooklyn Nets player. She did not spill the details of who the exact person was. However, she did mention that the player was a Libra. Fans quickly found out that the only Nets player to be born in that period was KD himself.

This was confirmation that Durant was the one to invite Rhoades to a date after an NBA game. However, things got even more interesting after that. KD reportedly invited a backup option to the same date that night. Lana said, “the guy who invited me also invited one of the other girls.”

She also slammed him right after. “We ended up leaving dinner, not because of that situation because, at that point, you’re already friendzoned, I don’t give a f*ck who you’re talking to, the date was really boring…”, Rhoades claimed.

Lana did not stop there. She also mentioned what went wrong on the date with KD. “I don’t want to be mean but me and this guy just didn’t click and I’m like what’s your favorite this, what’s your opinion on this, and he was just like, I don’t have opinions on anything, I don’t have favorite anythings, and he was serious and he wasn’t just saying that to shut down the conversation…he’s not spicy enough for me”, Lana mentioned.

Although it might sound like an exaggeration and just speculation, there seems to be enough evidence on the internet to tell us that KD might in fact be involved in one way or another with Lana Rhoades.