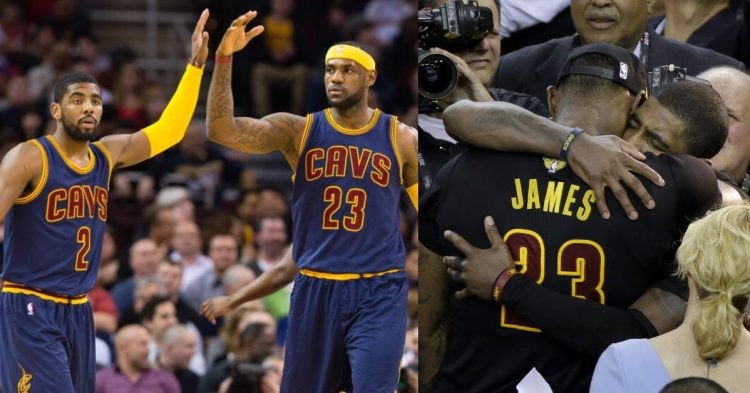 Kyrie Irving is an NBA athlete who currently plays for the Brooklyn Nets. As many haters he has, he is one of the greatest players of our generation. The way he has proved his doubters wrong regularly says a lot about his mentality and hunger to win.

Kyrie became famous when he started playing for the Cleveland Cavaliers. They drafted him at #1 in the 2011 NBA Draft. At 19, Cavs fans expected him to be LeBron James’ replacement right away. Although he could probably take on that challenge, filling in LeBron’s shoes as a rookie would have been hard.

Despite winning an NBA title together in 2016 from being 3-1 down, many reports claim that Kyrie and LeBron’s relationship was strained.

When Kyrie joined the Cavs, he was one of the team’s best players. In his rookie season, the American averaged 18.5 points, 5.4 assists, and 3.7 rebounds in 51 games. His numbers helped him bag the Rookie of the Year award that year. Despite performing decently, Kyrie could not lead the Cavaliers to the playoffs. He had a three-season wait till that playoff appearance came.

However, that was when LeBron came back to the city where it all started. Kyrie told the media then, “I’m happy he’s back. It’s going to be a pleasure to learn from him and grow with him these next few years.” In 2015, the pair led the team to the playoffs but lost to the Golden State Warriors in the finals.

The next year was the most important one in Cavaliers’ history. They made the finals for the second time in a row and were up against what was arguably the best team in NBA history: the Warriors. They had a record of 73-9 that season. It was all going their way as they had a commanding lead of 3-1 in the series against the Cavs.

However, things took a drastic turn for them as the LeBron and Kyrie-led team snatched the title away from the Warriors, making one of the best comebacks ever. It looked like LeBron and Kyrie were the saviors of Cleveland and like it was the start of a dynasty.

Things were reportedly the opposite behind closed doors. According to many reports, Kyrie did not want to stay in King James’ shadow. He was the main star of the team before his teammate’s comeback and lost that place to him.

A while ago, Kyrie Irving and Kevin Durant featured on The ETCs with Kevin Durant podcast. It was then when Irving revealed who he would choose to take a game-deciding shot with just 10 seconds left on the clock.

He said, “Depends on who’s hot. I don’t see it as anything other than that… one thing I’ve always been comfortable with is I felt like I was the best option on every team I’ve played for down the stretch. This is the first time in my career where I can be like ‘that motherf*cker can make that shot too.'”

That was during his early Nets career, alongside KD. Kyrie’s comments seemed to catch the attention of LeBron, who was his former teammate. LeBron responded, “I was a little like, ‘Damn.’ Once I got the whole transcript, I was like, ‘Damn. I wasn’t like, ‘Oh, you trippin’. I’ve hit game-winning shots my whole life.’ I was not like that. I was like, ‘Damn.’ Because … I played with Kyrie for three seasons.”

LeBron James on his time playing with Kyrie Irving

“The whole time when I was there, I only wanted to see him be a MVP of our league. I only cared about his success. And it just didn’t align. It just didn’t align. And we were able to win a championship. That’s the craziest thing. We were still able to win a championship, and we could never align. But I only cared about his well-being, both on and off the floor. And it kind of hurt me a little bit,” James added.

“Why must it always be brother against brother? Why? If I’m addressing anyone, I’ll say their name. Don’t listen to the false narratives.”

Kyrie Irving responds to claims that he was taking shots at LeBron James when discussing late-game shot-making. pic.twitter.com/jaKrVPGfsO

However, Kyrie defended himself and mentioned that he was not taking a shot at his former Cavs counterpart. Irving claimed, “If I’m addressing anyone, I’ll say their name. Don’t listen to the false narratives.”

Kyrie Irving’s friendship with LeBron may have been repaired now

Although the pair may have had their bad times in the locker room, they made a good partnership. In Game 5 of the 2016 NBA Finals, both of them scored 41 points against the Warriors. Those numbers speak at length about the type of partnership they had on the court.

However, as LeBron said, the two did not align. Kyrie has revealed a couple of years ago that he made amends with LeBron. He said, “This was a big deal for me, because I had to call him and tell him I apologized for being that young player that wanted everything at his fingertips, and I wanted everything at my threshold.”

“I wanted to be the guy that led us to a championship. I wanted to be the leader.. The responsibility of being the best in the world and leading your team is something that is not meant for many people,” Irving continued.

They may have had their bad times, but it seems like its all in the past now. Moreover, LeBron was one of the biggest reasons why Kyrie going to the Lakers was a rumor. There have multiple reports this year mentioning that LeBron wanted to run it back with Kyrie in LA. That could suggest that the pair have forgiven and forgotten any hard feelings between each other.