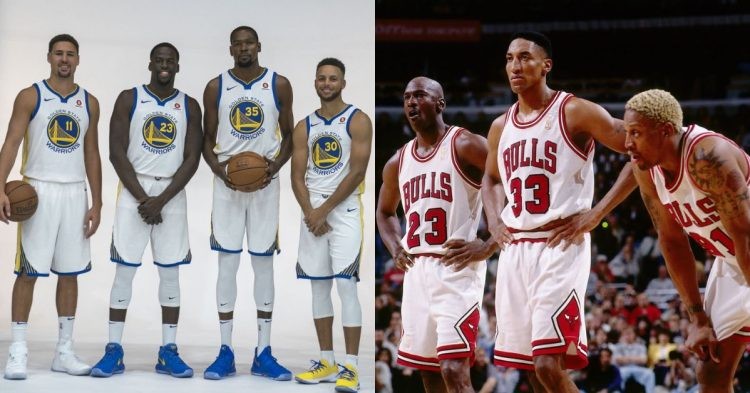 The Golden State Warriors won their seventh NBA Championship this year. The Boston Celtics were no match for them as the title fight was over in six games. Once again, the trio of Stephen Curry, Draymond Green, and Klay Thompson brought the trophy to The Bay.

Despite winning the title, we all know this wasn’t the Warriors’ best team. They had what was arguably the GOAT team back in 2015 when they finished with a 73-9 record. They took the throne from the 1996 Chicago Bulls, who had a record of 72-10. Adding on to that, the 2017 Warriors team was also one of their best.

Draymond Green claims the 2017 Warriors could beat the 1998 Bulls

The team had the formidable trio and Kevin Durant. That’s one team that struck fear in opponents. Their record that season was 67-15 and they beat LeBron James’ Cleveland Cavaliers to wrap up the title in just five games.

I’m watching the 98 Bulls vs Utah in the Finals… I can’t help but notice our 2017 team would’ve beaten these Bulls by a dub and these Jazz by 40 if they’re going to play these brands of basketball. And that’s why it’s dumb to compare Era’s

Recently, Green claimed that the 2017 team could give the 1998 Chicago Bulls a run for its money. Are they that good? Let’s compare the two teams.

The 1998 Chicago Bulls were arguably the best team of all time. Their best players were Michael Jordan, Dennis Rodman, and Scottie Pippen. That year, they played against the Utah Jazz in the NBA Finals. The Bulls won the title in six games after finishing the series 4-2.

Now, let’s have a look at the Warriors in 2017. Their team had Steph, KD, Klay, and DG all in their primes. All four of them were younger than 29 years old. Compared to them, where the Bulls’ main trio was all 32 and above and were in the final stages of their career. It is quite unreasonable to compare the two teams. The game has changed since then, it is a lot faster and more demanding from a physical perspective.

DG even tweeted how the game has changed since then. He said, “This game is being played from the free throw line and in. occasionally stepping out to the 3.” If we think about it, it is true. 3 pointers were not as popular back then, mainly because of the rules.

This game is being played from the free throw line and in. occasionally stepping out to the 3.

Can teams from two different eras in the NBA be compared?

However, Green concluded that it is not right to compare teams from different eras. And it is a point that I could agree with. The best way to see which team is better is to put them in the same era where the game styles are the same and see who comes out on top.

Question… When they are comparing Era’s are they taking into consideration the drastic differences In style of play? Regardless of the answer, it’s very dumb to compare one era to the next era.

That’s not all for Draymond Green and his tweets. He showed admiration for Jordan’s footwork by calling him “Black Cat”.

Jordan got the iconic nickname after people saw his elite movement on the court. The way he was stealthy, looked for the best opportunities to strike and how quick he was got him the name. DG mentions his footwork in his tweet. Jordan’s footwork was always known to be the best in the history of NBA. He was as good with his feet as he was with the ball in his hands.

The four-time NBA champ even mentioned Rodman and Pippen in his tweets. He recognized how good they were up against the Utah defense and how they could not be dealt with.

Rodman was INSANE!! And John Stockton had a tough time with these dudes. Hornacek had no answer for Pip

Rodman and Pippen had the Jazz defense on strings. Although their stats don’t say much, the way they played showed dominance and heart. You don’t really see that type of mentality with most teams in the present times.