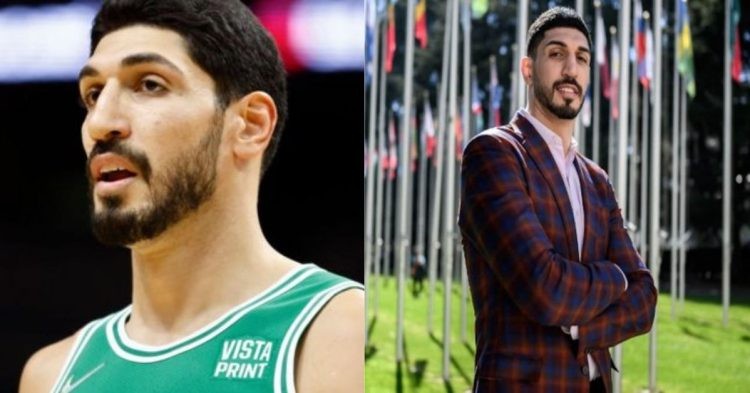 Enes Freedom Kanter on and off the court (Credit- Twitter)

Enes Freedom Kanter is an NBA player. However, he has become more famous off the court than he ever did on it. Kanter has averaged 11 points and 7 rebounds in the NBA. Enes changed his name to “Freedom” to stand up for the social causes he believes in.

Freedom has taken several stands on controversial issues. He has even spoken against LeBron James for remaining silent on certain topics. Freedom’s focus is on China and its exploitation.

The NBA has investments in China. Additionally, he has accused several prominent brands of engaging in illegal activities such as slave labor. He seems to love America and the concept of Capitalism. All said and done, it is important to understand what Freedom is fighting for and what he is saying is wrong.

That is the simplest way to say it. However, the truth is never really so black and white. The NBA is a vast organization and each franchise has its own investments to maintain. China engages in communism and Kanter believes they are ignorant of human life.

Kanter knows that Chinese products are made at a much cheaper price and then shipped to America. This brings enormous profits to the NBA owners. The products could include anything from Jerseys to shoes.

Freedom must have done his research better than the rest of us. He has made allegations against Nike of engaging in slave labor. He claims to know how these brands make their money globally and criticizes the NBA for taking part in it. However, are his claims legitimate?

Enes Freedom has portrayed himself as a true American. He only became a legal citizen last year. However, he has shown to be awe-inspired by various aspects of the country. He even posed with FBI agents for his birthday. He posted it on Twitter calling it “his best and most unique birthday“.

One of my best and definitely the most unique birthdays ever.

Thank you for throwing me the coolest birthday party at @FBI
Special thanks to all the agents out there who are putting their lives on the line to protect America.

We appreciate your service. pic.twitter.com/X8KcfmjDNm

Enes has also made attempts to ask Elon Musk to buy the NBA. He did it under the notion of “ending Chinese dictatorships’ influence on American Sports. These acts are more to arouse the people as opposed to actually causing any real change.

End the Hypocrisy
End the assault on Freedom

Is Enes biting the hand that fed him?

The NBA makes almost any athlete’s life an instant success. It puts them in an elite tier in society and perhaps even internationally. One could argue that the very platform Freedom has been given to speak on is a product that he is now fighting against.

To put it in other words, if the Chinese and the NBA didn’t mutually invest, he would not have the life he has, earns the money he does, or talk to the people he speaks to.

It may be harsh to criticize him. Additionally, the work situation in China may be abysmal. However, that is a matter for the UNO and various other human rights and legal organizations. The NBA is neither of these.

However, ethically speaking one can’t argue with Freedom. If an employee finds out that a company is engaging in unethical behavior, it is right to speak up. However, then the employee’s status and benefits in the company will be terminated as a result.

Kanter is currently a free agent and is not playing for the Boston Celtics this postseason. However, with a net worth of over 55 million dollars, thanks to the NBA, he is free to criticize it for potentially the rest of his life.