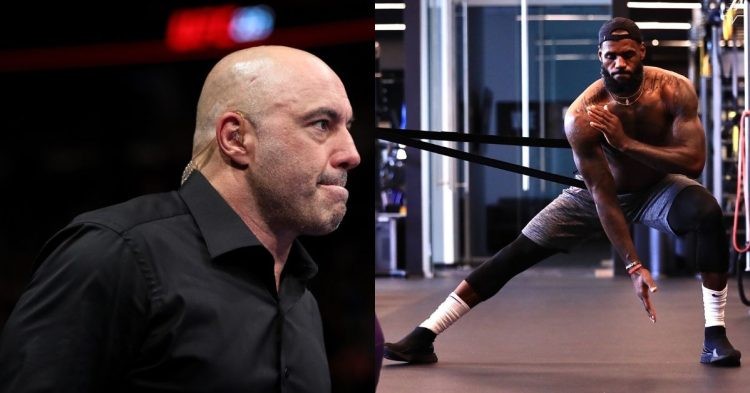 NBA players are one of the toughest athletes in the world. Their height and size make them a threat in any sport they play. Apart from that, how quick they are, or how agile they are also playing a part. When we think of the fittest players, LeBron James will surely pop up in our minds.

The LA Lakers star has been at the top of the game for almost two decades now. There haven’t been many players to do the same. Despite being 37 years old, he still stays in the best shape possible. If we’re being honest, only Cristiano Ronaldo is on par with LeBron’s fitness. Both these athletes have treated their bodies like temples. And that should explain how they are still able to perform at such a high level at this age.

LeBron’s fitness and lifestyle have prompted a popular celebrity to claim that he may have a future in another sport. It was none other than Joe Rogan.

Would LeBron James be among the greats if he was in MMA?

Rogan spoke in his podcast about how King James could be a dangerous Mix Martial Artist. He said, “A guy like that, if he was fighting, everybody would be f**ked. They are goddamn lucky that there’s that much money in basketball. And the people go, ‘you know what man.. a great basketball player wouldn’t necessarily make you a great fighter.’ Listen to me, save it. The guy is going to beat your f**ing ass.”

The American’s comments may shock many fans from both sports. But he may have a point. LeBron is 6 foot 7 in tall and weighs more than 250 pounds. If he competed in the UFC, he would be a light heavyweight fighter. At that size and weight class, there would not be anyone as agile as him. He is also known for his quick movements and his reflexes.

“He’s a winner. There’s a certain level of winners, he’d like do whatever f**k he wants,“ Rogan also mentioned. Even if we did not agree with the 55-year-old earlier, we surely would have to with this one. LeBron is definitely a proven winner. He has shown the world that he’ll go to extreme lengths to win. With that mentality, he would surely develop his skills to compete against the best in the octagon.