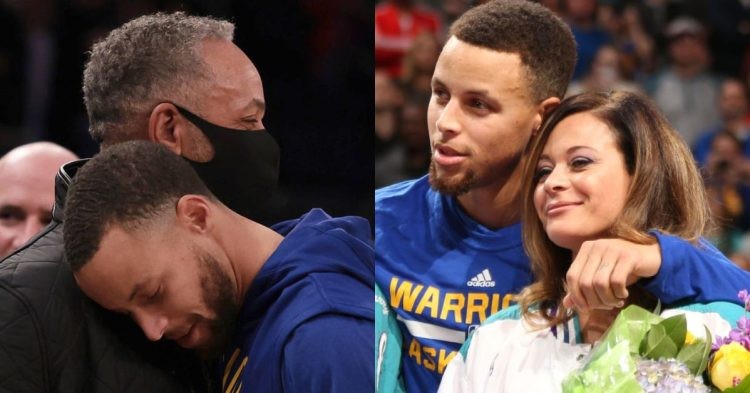 The 2021-22 NBA champions were crowned the best team, not only of the year but the last decade. The Golden State Warriors picked up the Larry O’Brien trophy for the 4th time in 8 seasons. However, the biggest statement from the season was Stephen Curry winning his first ever finals MVP. He became the first player in NBA history to win 3 MVP titles in one year, All-Star MVP, ‘Magic Johnson’ MVP, and Finals MVP. It goes without saying, a huge part of Steph Curry’s success inside the court can be credited to his parents Dell and Sonya Curry.

Stephen Curry is an 8-time NBA All-star and all-NBA player, 2-time MVP, and 4-time Champion. He’s also one of the only active players on the All-NBA 75th Anniversary team. In his 13-year career, he’s won 2 scoring titles where he averaged over 30+ points per game in both of them. However, he’s still on the cusp of becoming the best point guard of all time.

Dell Curry began his NBA career after he was drafted 15th overall in the 1986 NBA draft by the Utah Jazz. In the late 80s-90s era of basketball, big men and mid-range scoring with tenacious defending were all you could see in the NBA. Dominated by players like Kareem and Magic and you can see the point I’m trying to express. The concept of a 3-point line existed but was not utilized to its full extent.

Dell Curry became one of the pioneers of a perimeter-centric style of play. He had 9 seasons where averaged more than 40% from behind the arc. In 1998-99, towards the tail end of his career, he lead the entire NBA with 48% from the 3. Dell was not an exceptional player but did his job well. He even emphasizes that with his 6th man of the year award.

But looking at the broader picture and you see that his game did a lot more. Every night that he’d go out on that court and shoot the lights out, his son would fall more in love with the game. During Dell’s time at Toronto, Steph would join in the pregame shootarounds and make half-court shots like it was nothing. A clear indication of what was to come but we all missed it. However, the confidence was there and alive.

Most NBA players that have children do not usually see them reach the potential of NBA-level basketball. Despite how much you coach them or how exposed they are to the game. But Steph’s pure passion and love for his dad’s game and style of playing propelled him to a place most players cannot even dream of reaching.

Is Dell proud or jealous of Steph’s success?

As a dad, being the reason for your children’s success is always a great feeling. But knowing how competitive the sporting scene is, support is not always guaranteed. However, Steph has reached a legacy much greater than his dad and Dell has accepted that with open arms.

“He’s definitely better than I was. I had a two-dribble limit. He’s probably best off the dribble. His range is definitely farther than mine was. But it’s a different NBA. I would never take 35-foot three-pointers with 17 seconds on the shot clock. So it’s a different game, and he plays with a team and a coach that allows him to play that freely.”

Steph took what Dell Curry said PERSONALLY, when he was a kid, and became the greatest shooter ever 😂 pic.twitter.com/2zcNoT1hRj

In an interview with GQ back in 2016, Dell got candid about how he truly feels. He even feels that watching Steph play is a better feeling than actually playing.

“It’s a lot more joy. As a father, you’re so proud, especially as an ex-player, knowing how hard it is to get to that level, to stay that consistent. Now he’s the guy on the scouting report that everybody’s trying to stop, and he’s still able to do what he does. It’s unbelievable, kind of surreal for your son to follow his father’s footsteps, but to do it at the level that he’s been at. Yeah. I’m amazed just like everybody else when I watch him play.”

We’ve seen them still be competitive with each other through in a game of H.O.R.S.E. and even in pre-game shootarounds. But it is almost a guarantee to see him in the stands and support him from there.

Sonya Curry made Steph better by fining him

Dell and Sonya Curry met at Virginia Tech back in the 80s. At the time Sonya was a volleyball player while Dell was bossing the court. They got married in 1988, the year Steph was born. At the time Dell was in Cleveland and Steph was born in the same hospital as LeBron James.

They were together for 33 years and were seen at almost all the biggest moments of Steph’s and Seth’s careers. Sonya Curry held down the house and raised them.

“I’ll always try to claim his tenacity and determination…I shiver when I just think about it, I’m hearing the words but it’s not really settling in my heart. The ‘Kobes’ getting them and the ‘Jordans’ and they’re saying Steph Curry, wow. My son is MVP.”

Sonya Curry may not be a basketball superstar but she still coaches her son by teaching him that mistakes have consequences. If Steph gets more than 3 turnovers in a game, he owes his mom $100 for every turnover. That’s an expensive mistake to make for a player that averages 3 turnovers per game for his career.

But this is all still just for Steph to get better. Sonya Curry and Dell had almost aborted Steph. In her book, she revealed that she almost went through with the abortion and robbed us of the greatest shooter in NAB history.

“God had a plan for that child. There could be no Stephen. If I would have gone through that there would have been no Wardell Stephen Curry II.”

Sonya and Dell are currently divorced. They are also partaking in a real-life adaptation of ‘Wife-swap‘ with their current relationships.

Congratulations to Steph Curry for making history and setting the new NBA All-Time 3-point record tonight!! Thank you @StephenCurry30 for revolutionizing the game of basketball forever! 🙏🏾 It was great to see his parents Dell and Sonya there supporting him!

But they have not let it get in the way of being Steph and Seth’s parents and this is why, despite all their problems, Stephen Curry would not ask for better parents.

Yair Rodriguez’s UFC Fight Purse: How Much Money Has El Pantera Earned in His UFC Career?