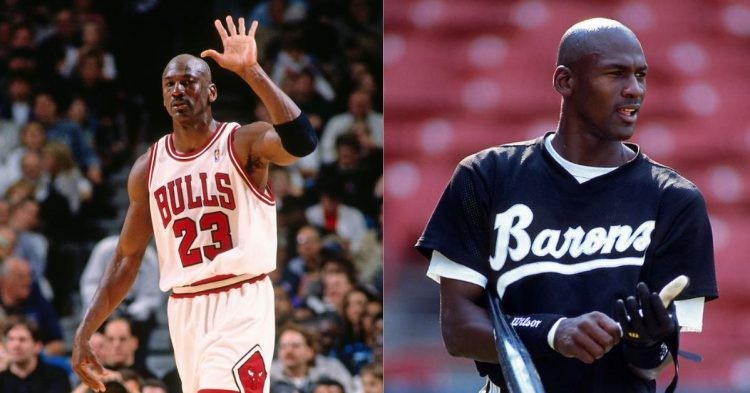 Michael Jordan in the NBA and MLB (Credit- Twitter)

We all know Michael Jordan is one of the NBA legends and widely considered the greatest player of all time. Basketball was a sport he dominated in and crushed his opponents at the highest level. He only played 13 seasons with the Bulls and 15 full seasons in the NBA.

One must wonder why such an impactful athlete spent fewer years in the league compared to the other greats. After all, we all know Kobe Bryant and LeBron James have spent at least 5 more years in the league. It turns out that baseball is one of the reasons MJ decided to retire from the NBA. Yet, less than two years later he gave up on baseball and returned to take control of the league.

Not too many people know why Michael Jordan decided to pursue baseball. Additionally, they also don’t know how he did in the sport and whether that influenced him to return. It is important to know the whole story.

There are a bare handful of NBA players who have made the finals barely once in their careers. Jimmy Butler, Chris Paul, and others were given one chance to win so far but failed. It is no simple matter to win an NBA title. Players have always claimed that winning the championship is the “ultimate goal” and “all that really matters“.

The above-mentioned statement has been considered true, regardless of the generation or the era in which basketball is played. Therefore, Michael Jordan truly felt there was nothing left for him to accomplish in basketball after his first three-peat. Additionally, his father was murdered and the entire incident sapped Michael’s will to continue to play basketball.

As a result, a hiatus was required and Jordan announced his retirement from the NBA for the first time. He then shocked the world by signing a deal with an MLB league team called the Chicago White Sox. His father James Jordan Sr always hoped that his son would be a Major Leagues Baseball player one day. This helped MJ decide to try the sport for a few years out of respect and to honor his dad’s wishes

We all know what happened after the baseball stint was over. When MJ returned to the NBA, his old team was a shell of itself and lost to Shaquille O’Neal and the Orlando Magic. This further motivated MJ’s revenge season and he helped the Bulls win 3 more titles as a result