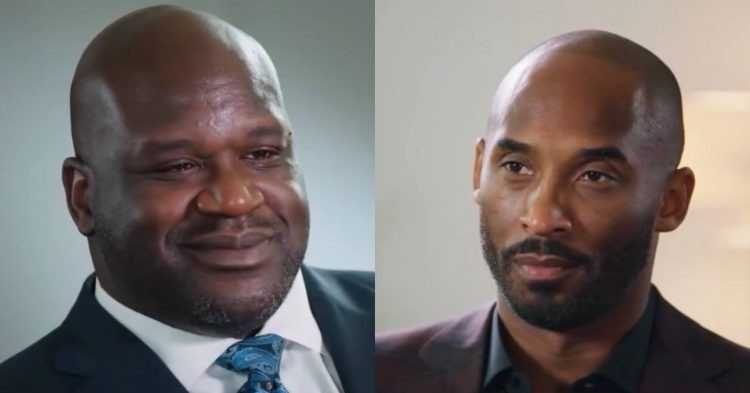 There have been many legendary duos in the NBA. Kobe Bryant and Shaquille O’Neal‘s partnership is surely one of them. The legendary duo won three NBA titles together at the LA Lakers, which was a 3 peat. They formed one of the best partnerships the NBA has ever seen to date.

Although they were unstoppable on the court, it was evident that they had their fair share of drama off it. We all know that both Shaq and Kobe always had a rift when they played together. However, the interesting fact is that it was never on the court. That was what both of the players revealed in their last interview together.

Bryant sat with his former teammate to sort out the differences the pair had. During the interview, Shaq briefly mentioned, “Because I had you, I was able to just chill out.” The Black Mamba responded to this by saying, “Yeah that’s what pissed me off! That was it right there!”

When the players were teammates at the Lakers, many reports at the time mentioned that Kobe Bryant did not like Shaq’s mindset. The big man himself admitted during the interview that he was able to relax since Kobe was able to single-handedly dismantle teams.

About Shaq’s mindset, Kobe even once claimed that the center was out of shape. In an interview with ESPN, Bryant was asked for his response when O’Neal claimed the Lakers were his team. Kobe said, “It doesn’t matter whose team it is. Nobody cares. I don’t, Karl doesn’t, Gary doesn’t, and our teammates and the fans don’t either.”

“There’s more to life than whose team this is. But this is his team, so it’s time for him to act like it. That means no more coming into camp fat and out of shape, when your team is relying on your leadership on and off the court,” the former NBA star added. He did not hold back when it came to criticizing Shaq’s work ethic and mentality off the court.

Moreover, Bryant has also claimed in the past that Shaq would have been the greatest player of all time if he had the former’s mindset. However, “The Big Aristotle” responded recently. He mentioned that he did not have the time put in the work like Kobe, mainly because of the fact that he already had a family at a young age.

During the interview, both the players brought it back to the good old days and about reminisced the memories they shared. Despite their differences, they made peace with each other.

As Kobe mentioned that all they did was to get the win, Shaq claimed, “What makes us the best is that no other duo had as many outside controversies as me and you had. That’s why I always say we’re the most enigmatic, no one can figure us out. Most controversial, when it comes time to step on the court, most dominant one-two punch little big ever created in the game.”

It was wholesome for the entire NBA community to witness two of the greatest players make it right with each other. They may have had their bad times, but what never can be ignored is that they did what needed to be done to push each other. Ultimately, that’s what defined Kobe and Shaq, both as players and individuals.