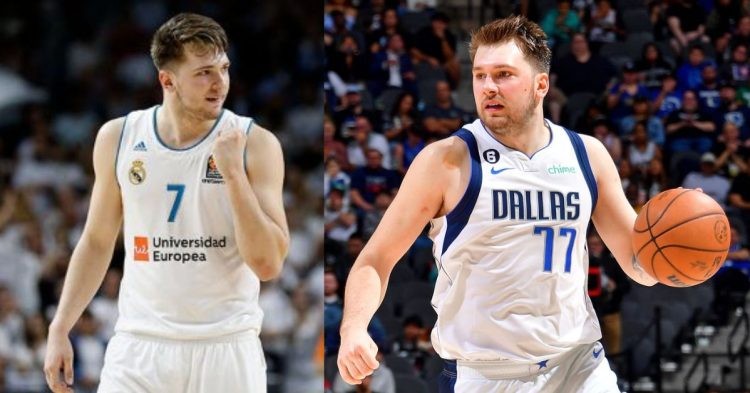 NBA fans are aware that Luka Doncic wears number 77 on his jersey. However, not many know the real reason behind the Dallas Mavericks superstar deciding to wear these numbers. NBA players are given the luxury of choosing whatever number they want to wear.

Let us take a look at why Baby Bird decided to wear #77. In order to do so, we should take a look back at his past and early life. By doing so, we can understand why he made this decision and the context around it better. After all, early influences play a role in choices like this.

Some NBA fans might have heard about Luka even before he got drafted into the NBA. He was developing into an excellent player with Real Madrid. Moreover, he competed in the Euroleague and won several tournaments and MVPs.

Throughout all of this, Doncic wore #7 on his jersey. However, he changed his number to #77 when he entered the NBA. When Luka Legend tried to make business decisions, his mother Mirjam Poterbin entered the scene with the trademark rights to “Luka Doncic 7.” When he tried to file another patent for his new number, it caused a lot of problems due to the extensive overlap between the two trademarks.


Doncic and his mom soon resolved their issue internally and he removed his petition to cancel her trademark. Now let us look at why he decided to wear this number.

Ersan Ilyasova wore #77 before Luka in the NBA

It turns out that Luka really admired a player called Vassilis Spanoulis. To those who do not know, he is a former Greek basketball player and one of Doncic’s early role models. Since Luka had great respect for Spanoulis, he decided to wear #7, the same number Vassilis wore.


Doncic would have certainly liked to wear the same number entering the NBA. Unfortunately for him, his choice was already taken by Dwight Powell, an NBA star who has been with the Dallas Mavericks for 9 seasons now. Therefore, Doncic simply decided to wear #77 in order to still show respect for his idol. This is the same number former Bucks star Ersan Ilyasova wore. He later revealed his decision to change numbers.

“Spanoulis was my idol since I was little. I was watching him. It was kind of sad seeing him retiring. That’s why I wear No 7. I mean, I couldn’t wear No 7, cause it was already taken, so I took 77. He was really, really big time for me.”

While it is important to show due respect to those who inspire us, Luka understood that respecting a veteran teammate like Powell and changing his number was the way to go about doing it. This way, he will be able to create his own legacy with his own number.