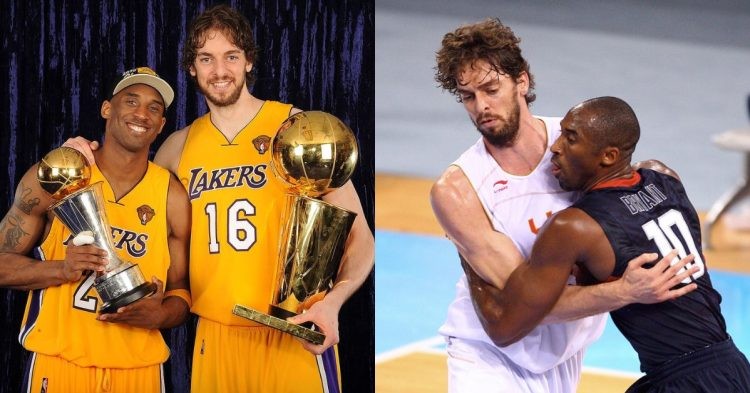 Kobe Bryant is one of the greatest athletes we all have witnessed. He is one of the best NBA players of all time. With 4 NBA Championships won, Kobe cemented his place as one of the greats, among the likes of Michael Jordan and LeBron James. One of the most unique things about Kobe was the fact that he was a one-team man.

26 years ago, the Lakers acquired rookie Kobe Bryant from the Hornets.

The rest is history 🐍💜💛 pic.twitter.com/XSyGJEDqBx

During Kobe’s tenure at the franchise, he formed many meaningful partnerships with players. The most famous one we all are familiar with is his relationship with Shaquille O’Neal. The star center also joined the Lakers team the same year as Kobe. Both of them became one of the best duos to ever grace the game. Their most notable achievement would be the 3-peat of NBA titles, (2000, 2001 & 2002).

As we all know, there were many lows in their relationship as well. After winning three titles in a row, many reports claimed that O’Neal became lazy. The next year, the Lakers lost to the eventual champions, the San Antonio Spurs in the Conference Semifinals. After Shaq was shipped to the Miami Heat the next year, Kobe won two championships without Shaq.

Shaq wasn’t the only one who formed a deep relationship with the late NBA star. Former Lakers center Pau Gasol also became a brother to Bryant after Shaq’s departure.

A couple of months ago, it was officially announced that LeBron James will produce a documentary on the 2008 USA Men’s Basketball Olympic Gold Medal Winning Team, along with Netflix and Dwyane Wade. Excitement shot across the NBA community when news spread of King James donning the producer hat once again.

Netflix and the International Olympic Committee have collaborated with executive producers @DwyaneWade and @KingJames for The Redeem Team, a new documentary about the US Olympic Men’s Basketball Team’s quest for gold at the 2008 Olympic Games in Beijing!

As we near the release, a sneak peek of the movie has emerged. In that, LeBron, Dwyane, and Carmelo Anthony reveal a story about Kobe and how he wanted to beat his then-Lakers teammate Pau Gasol.

It starts with an interview of Kobe himself, before the Men’s Basketball Finals in the 2008 Beijing Olympics. It was one of the most-awaited games that year. The reason for that was because the Black Mamba hadn’t featured in the Olympics till then, despite already being an established player in the NBA with three titles.

In 2004, the US Olympic Men’s Basketball team lost the gold and sought redemption in Beijing 2008. @KingJames, @DwyaneWade, and Kobe Bryant led The Redeem Team. This is that story. #TUDUM pic.twitter.com/95MCsOQ6h3

Before the game, Kobe said, “Spain is the defending world champions. We’re both undefeated. And you know, this is the game everybody was waiting to see.” Speaking about Pau, Bryant mentioned, “we’re like brothers, we’re very close. And I’m very happy for him that he’s playing well. Yeah I mean we’re very tight so it’s a little tough to compete against him.”

This is where it all got interesting, as Gasol suggested Kobe knew he had to mentally beat his Lakers counterpart. He said, “Right before the game, Kobe came to see me when they came to visit the Village. My big brother came to see me with my teammates, which everyone was like ‘Whoa, Kobe’s in our apartment, how cool’. And I believe that might have been part of his strategy to kind of soften me up.”
The big day arrived when both basketball powerhouses faced each other. Kobe told his teammates that will “set the tone at the start of the game”, according to LeBron. Moreover, James said, “he said ‘I’m running through Pau’s f******g chest”. This caught the entire US team by surprise as the entire world knew about the brotherhood between the two. Hence, the other players took it as a joke, which is quite understandable.
To the entire arena’s surprise, Kobe did exactly what he said he was going to do. Wade claimed that he knew Gasol was going to be the last screen during that play. And just like he said, Kobe absolutely demolished his Lakers brother and put him on the ground.
About the exchange, Gasol said, “he just went right to the middle of my chest, tried to get through me to send a message, not just to me but to his teammates, saying, ‘hey this might be my brother. I play with him, we’re close. But I don’t care about anything else but winning.’” In addition to that, LeBron also revealed that the tackle surely set the tone to motivate them to win the game.
The incident spoke at length about Kobe’s mentality. He knew he had to win no matter what, and he was not letting his brother stop him. When he put Gasol on the ground, we could see Kobe Bryant’s will to win. And despite winning two NBA titles with Gasol, Kobe put that relationship aside to prioritize winning for his country. Eventually, Kobe put in a shift against Spain that night and guided USA to a gold medal win.
Tags: Kobe BryantLeBron JamesPau Gasol
Previous Post