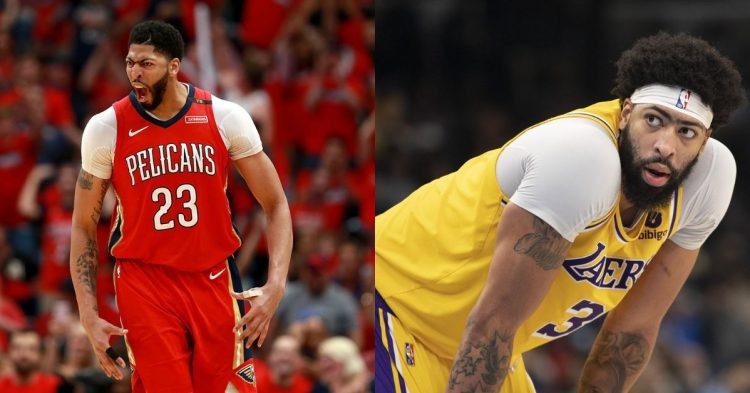 There have been many wonderkids in the NBA who we have seen come up the ranks. One such player was Los Angeles Lakers center Anthony Davis. He is currently on the same team as LeBron James and Russell Westbrook. AD won the title with LeBron in 2020 in the middle of the pandemic. There are still fans who invalidate the win saying the Lakers wouldn’t have won if not for the pandemic situation.

Despite having a talented team, the Lakers have struggled to contend for the title. They have now missed the playoffs for the second year running and the reasons are beyond the talents of the team. AD has been an instrumental part of the team, and literally the “center”.

He connects all the other players and has been complementing LeBron’s play style well too. However, his form has fallen drastically in the last couple of years and he has not touched the heights that many expected him to.

How did Anthony Davis come up the ranks as a young player?

Before joining the NBA, Anthony led his college, the University of Kentucky to a national championship with a 38-2 record. In 40 games, he averaged 14.2 points, 10.4 rebounds, and 4 assists. Those are some impressive numbers for anyone, let alone a center.

Kentucky’s head coach, John Calipari even praised AD. He said to TheAthletic, “You just knew he was a generational type of player. I may not ever coach another one like him.”

Anthony Davis played only one year of college ball, and it was one of the greatest NCAA seasons of all time.

Practices against LeBron and KD. A national championship. @AntDavis23 was “an alien.”

An oral history of The Brow’s lone year at Kentucky: https://t.co/nCQHBhKnfv pic.twitter.com/hcAfDa1tVB

The New Orleans Hornets(now New Orleans Pelicans) drafted him at the first pick in the 2012 NBA Draft. When he was a young teen, he never thought that he was going to become a professional NBA athlete. His sudden height growth during his sophomore year made scouts run behind him. When he joined, the league listed him at 6’10in. No one thought a player of that size could handle the ball that well. The rise of AD started right there.

He put up 20.8 points, 10.0 rebounds, and 2.8 blocks, a double-double. That isn’t too bad for a player that just had his second year in one of the toughest leagues in the world. He became an All-Star for the first time that year. The same went on for a few years as AD kept on putting up double-doubles as averages regularly. His best season with the Pelicans was in 2017-18. Davis averaged 28.1 points and 11.1 rebounds that season.

In 2019, the Lakers acquired Davis. His first season was one of his personal best, as he kept up the numbers as well. But the title win that season made the season better for him. He played a pivotal role in the title win that year. Many expected AD to go on and reach greater heights after that season. However, that was when he faced the biggest obstacle in his life.

In just his second game back from an MCL sprain, Anthony Davis has a large wrap on his wrist early vs. Sixers. 😳

Lakers say he is available to return. pic.twitter.com/8se8O9jydm

In the 2020-21 season, the Lakers star only played 36 games. He missed games due to injuries related to Achilles, Quad, Ankle, Back, Adductor, Rib, Finger, and more. He became an injury-prone player that could not seem to recover from his body issues.

AD would have wanted to recover for the 2021-22 season but that did not go to plan as well. He even missed the first game of the season because of a fever. That was just the start of another injury-riddled season for Davis. He just played 40 games for the Lakers last season as well.

He was once known as a generational player when he came to the league. But injuries have caused his career to take a huge turn. If he did not have this many injuries to spoil his playing time, he would have become one of the best players in the world, as he once was. However, he is still just 29 years old and has a few years left in the tank. If he takes care of his body well, Anthony Davis will surely have a better future than his recent past.