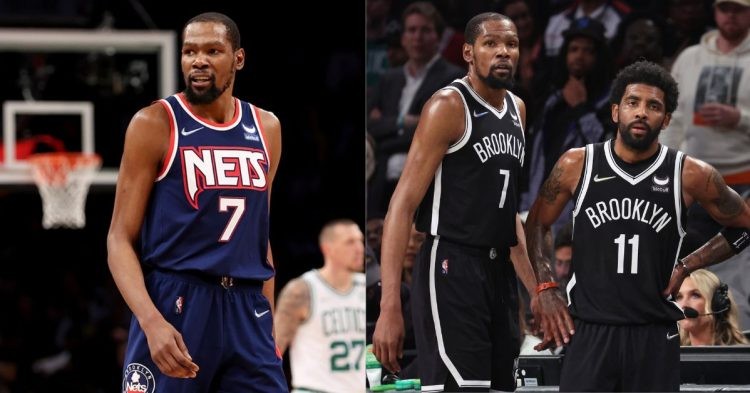 Kevin Durant has surprised the NBA world by asking for a trade from the Brooklyn Nets. The 2x NBA champion had a disappointing season with his team. They were swept in the first round of the 2022 playoffs by the Boston Celtics. There were several reasons the Nets were unable to make a deep postseason push. However, reports have emerged that KD is now looking to be traded to another team.

Kevin Durant has requested a trade out of Brooklyn, sources tell @TheAthletic @Stadium.

Kyrie Irving and Kevin Durant joined the Nets with the hopes of bringing an NBA championship to the franchise. Three quick years later, Durant seems to have lost faith in his ability to carry this team to the promised land. Since he has requested to be moved, it is important to know which teams are likely to take him on.

It is quite difficult to say for certain which team ends up signing Durant if he does indeed walk. He has been averaging 29.9 points, 6.4 assists, and 7.4 rebounds this season. The only certain thing is the fact that the Nets will not be looking to step down from contention. Even if they lose their franchise cornerstone in KD. With that being said, here are the best possible options for the Nets at this moment.

Out of all the trade scenarios that have emerged. This is quite likely. The Suns’ center Ayton has been a crucial part of their trip to the NBA finals in 2021. However, Phoenix seems unwilling to offer him a max contract extension. This has escalated the tensions between both the player and his team. This would lead to Phoenix being an ideal destination for KD if a sign and trade occur.

League rumblings of a potential Deandre Ayton trade, per @RealQuintonMayo;

It is also important to keep in the back of one’s mind that Ayton alone will not make it an equal trade. Therefore, the Suns would have to package a few role players or draft picks with Deandre if they hope to get Durant. They hope to remain in contention and pairing KD with CP3 and Devin Booker gives them a great shot at making the NBA Finals again.

There were several reasons the Brooklyn Nets failed to make an impact in the postseason. The Ben Simmons and James Harden trade was a huge part of this. It is likely the Nets will look to send Simmons packing elsewhere, especially if Kevin Durant is gone. Here are some of the other trades that could potentially happen as well.

Kevin Durant to the Miami Heat

Jimmy Butler and the Heat fell just one game short of making the NBA Finals. The franchise has always been known for making power moves to remain in contention. Moreover, PJ Tucker seems unwilling to be with Miami next year and looks to explore free agency. This could lead to Miami making moves and sending their young core to Brooklyn. It would also result in Jimmy, Bam, and KD being on the same team. However, the Heat would have to trade away a lot of assets to match the salaries

The New Orleans Pelicans were in the middle of a rebuild this season. They traded Lonzo Ball and Josh Hart this season. Yet, they were able to make the NBA playoffs and forced the Phoenix Suns to 6 games. Durant could potentially head there to pair up with Zion Williamson and CJ McCollum. However, this trade would involve sending Brandon Ingram and other key role-players away in return for KD.

The Portland Trail Blazers could pair Durant with Dame Lillard

Damian Lillard was injured and did not play much this season. He has carried his team his whole career but is yet to make an NBA Finals, let alone win one. Kevin Durant would certainly help him get much closer to this goal. Dame has made it clear he is loyal to the Trailblazers. The team should look to package several role players and draft picks to pair both these superstars together.

KD to the Denver Nuggets with Nikola Jokic

This is perhaps quite unlikely. Yet is possible the Denver Nuggets decide to trade Michael Porter Jr, Aaron Gordan, and other role players to pair Jokic and Durant. This would be considered a unique combination due to their differing skill sets.

It is yet to be seen whether this trade or any other trades come to fruition before the season begins.