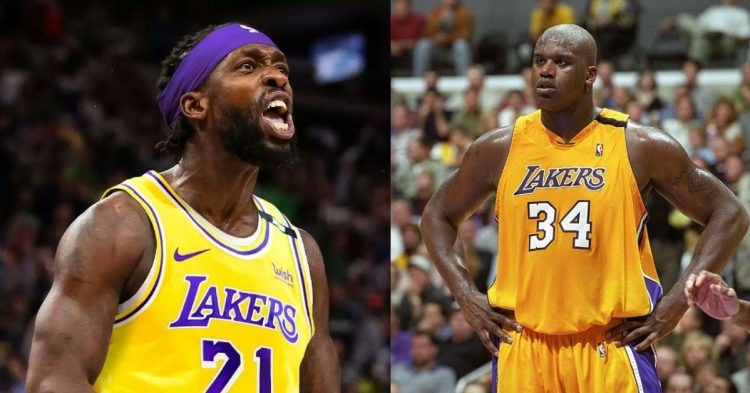 Shaquille O’Neal is one of the NBA’s finest. No one can really forget the way he broke onto the scene in 1992. When he played for the Orlando Magic, the world knew that we were going to see something special. Shaq was the most successful when he played for the Los Angeles Lakers. Together with Kobe, he achieved the legendary 3-peat in LA.

His experience in the game is unmatched in the current era. Shaq is never afraid to share his opinions with the world even if they tend to attract unwanted attention. A while ago, he called out the NBA community for using the word “superstar” loosely when it came to players. Now, he has taken a huge shot at two current players. In addition to that, he has also backed LA Lakers’ new arrival Patrick Beverley.

On the Big Twirl episode of The Big Podcast With Shaq, he said, “I’ve got nothing bad to say about Pat. You know why? He play the game like it’s supposed to be played. Not these dudes making $200, 300 million and can’t play at all.”

.@SHAQ: “I’ve got nothing bad to say about Pat… He play the game like it’s supposed to be played. Not these dudes making $200-300M and can’t play at all.” 👀#TheBigPodcast | https://t.co/eTOZLOgznZ pic.twitter.com/a33zxEDgKz

Although he didn’t call out Rudy Gobert and Donovan Mitchell openly, it is highly likely that they’re his targets. The reason being these were the only two players to leave the Utah Jazz who were guaranteed to receive hundreds of millions. Shaq’s comments suggest that he thinks Gobert and Mitchell are more money-driven when compared to Pat Bev. Apart from the money factor, the 50-year-old also explained what makes him special.

O’Neal also mentioned, “Listen, you want a guy like that on the team. A guy like that, you don’t tamper with. I played with a guy like that named GP [Gary Payton]. GP used to come in talking crazy. Think we going to say something back? Nope. Because you know why? He going to do that on the court. You know that helps you do? Win your fourth championship. Lakers need a guy like that. L.A. gon love Pat Beverley. Watch.”

Gary Payton joined the Miami Heat in 2004, and eventually won the NBA championship in 2006 with Shaq also on the team. We all know how GP was back in the day, when he had his confidence sky-high. Similarly, it seems like Pat Bev is extremely confident in himself and Shaq is all for it.