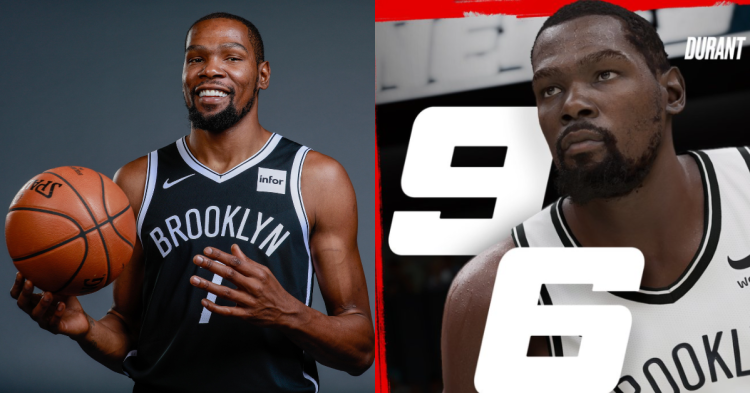 Just a few weeks ago, as he prepared to begin a new season with the Brooklyn Nets, star forward Kevin Durant made the decision to revoke his trade reiteration. Durant requests an explanation of his ranking in light of the upcoming release of the next NBA 2K game.

Throughout the week NBA2K23 game’s team and individual ratings have been leaked or made public. The two-time Finals MVP isn’t happy with his grade. With a total rating of 96, Durant is the top player on Brooklyn’s roster. KD seems to want it to be spot even when it comes to a a game as well.

2K have been generous with the team ratings for the Brooklyn Nets. Durant is surely at the top. However, he seems to still want more and be a 99 overall on the game. It also suggests its a matter of pride for the player at this point.

I am petitioning for us to remove MJ on the cover and replacing with you the real 99 https://t.co/hzXzHhU04X

Ronnie DK did at least reply to the sharpshooter via Twitter to appease that aspect of his game. It should be noted that nobody achieved 99 rating in overalls this year.

Why Kevin Durant is right where he belongs

Durant is tied with LeBron James, Stephen Curry, Joel Embiid and Nikola Jokic at 96 while only being behind Giannis Antetokounmpo (97). Which in my opinion is not a bad company to share a position with.

In the regular season of 2021–2022, Durant maintained his outstanding play when he averaged 29.9 points and 7.4 rebounds. The 33-year-old, however, didn’t perform to his customary level in the postseason, shooting 38.6 percent from the field in Brooklyn’s first-round sweep.

The fact that Durant missed 64 games over the following two seasons and the whole 2019–20 season. Due to an Achilles injury won’t help his durability rating in 2K either.

Returning to his rating of 2K He can possibly be making light of things. In the video game, Durant has never scored more than 96 points. He’s really had that rating for five out of the last six years. His NBA 2K19 rating was 95. KD has been looking to win the NBA title with the Brooklyn Nets for a while now.

The last time he won a ring was in 2019, when he left the Warriors. If the hate he got during the trade wasn’t enough, this below-par rating surely be.

In the end, it really doesn’t matter. But as we all know, Durant enjoys stirring up controversy online. Maybe he’s just having a good time. After a heartbreaking first-round departure earlier this year, getting the Nets to the Promised Land is of the utmost importance.