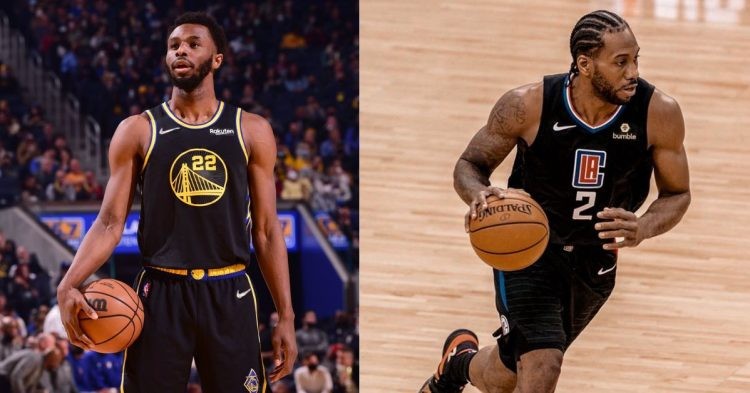 Statistics go a long way in the NBA. They act as a means to display certain levels of performance shown by players. One major stat we use in the league to compare how good a player is when put against another is the total points scored. Recently, a stat has emerged, surprising many. It turns out NBA champion Andrew Wiggins has made more points in his career than Kawhi Leonard.

Wiggins has scored 11,519 points and Leonard has scored 11,085. The Cleveland Cavaliers introduced Wiggins to the league when they drafted him as the first overall pick in the 2014 NBA Draft. But they chose to trade him to the Minnesota Timberwolves even before he played his first game for the Cavs. It was with the Wolves where The Maple Jordan made a name for himself as he won Rookie Of The Year.

On the other hand, Kawhi introduced himself to the league when the Indiana Pacers drafted him at the 15th pick. They then traded him to the San Antonio Spurs for George Hill. He would go on to play for the Spurs till 2018.

Wiggins has featured for two teams in his NBA career, the Timberwolves, and the Golden State Warriors. He has played in 625 games for both of them including playoffs. The 27-year-old won his first NBA ring this year with GSW in style. The American was exceptional during the finals against the Celtics. He even manage to impress former NBA champion Kevin Durant, who revealed how Wiggins used his height to gain an edge.

Many will be surprised at the fact that the Warriors player has scored more. But in reality, it is all not that shocking. When Wiggins was at Minnesota, he was the main scorer. He played at the small forward position where his team relied on him to get into the scoring positions.

And he was quite good at that. He had scored more than 8,500 points for the Timberwolves. When we compare his play style to Kawhi’s, we can see the difference. Despite being a small forward, Leonard has been a defender in the teams he has played in. During his time at the Spurs, he was the main defense option for the team. Wiggins has been the main scorer for his team till he joined the Warriors.

That’s not all for the reason why Kawhi may be behind in points. In the 2017-18 season, he played just 9 games. The LA Clippers star may not have a reputation of being injury-prone. But he has had his fair share of injuries during his career. Kawhi is even often compared to Anthony Davis since both of them tend to miss games due to injury often.