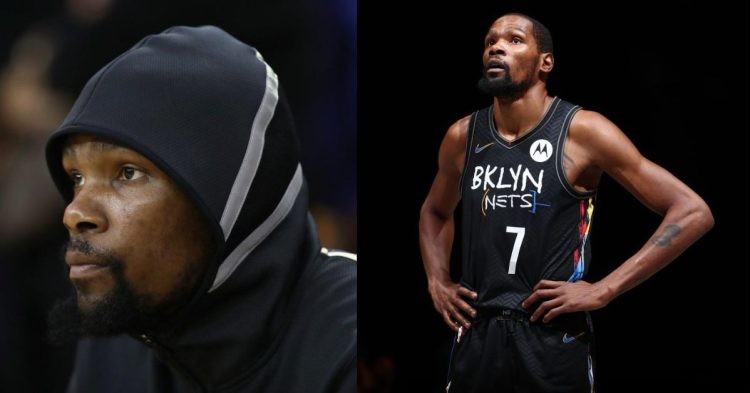 Kevin Durant has been in the news for a while now. His name is heard in the headlines so much that we can’t distinguish what it is for. The main reason is the fact that he handed in a trade request to move away from the Brooklyn Nets. Seeing that there has been little to no development on the status, KD decided to meet the Nets Joe Tsai directly.

The American is one of the most hated NBA players. In fact, he is the second-most hated player in the NBA, just after LeBron James. KD is one of the best players playing in the current era. His achievements in the game tell us that people should recognize his greatness. However, his decisions regarding the teams he chooses put him in hot water each time.

Earlier today, a Twitter user mentioned KD in a tweet. He made a jibe at the player saying, “Unlike [Kevin Durant] I actually enjoy taking the hardest road”. The comment is something that Durant haters have been throwing at him for a while now. Many claim that he always looks to move to the best team to win titles. The idea first came when KD move to the Golden State Warriors from Oklahoma City Thunder.

That year, the Warriors beat OKC, which had a world-class Kevin Durant on their roster. After he moved to The Bay, he won the title with GSW the next year. That’s when some fans really started believing that Durant could only win titles with a powerhouse.

U enjoy having a shitty car and getting to work and not being able to connect to the internet? https://t.co/cPUf9Zfr6W

The 33-year-old replied to the fan saying, “U enjoy having a sh*tty car and getting to work and not being able to connect to the internet?” Although some fans loved the hilarious and no-nonsense response, some went against him as usual. One fan said, “Stop tweeting go add something to your legacy Kevin”.

Stop tweeting go add something to your legacy Kevin

Durant is one of the most decorated players in the world right now. He has won two NBA titles, three Olympic gold medals(2012, 2016, and 2020), two NBA Finals MVPs, and many more. Despite all his achievements, KD still gets the hate he doesn’t deserve. Another user also replied to Durant’s tweet.

In the tweet, the user said, “Damn KD making fun of poor people now”. Although that’s an exaggeration of the actual meaning of KD’s tweet, it does seem like he is making fun of the person. However, NBA fans seem to hate him for anything he does, and this doesn’t come as a surprise. A false narrative might even start in the future because of this.