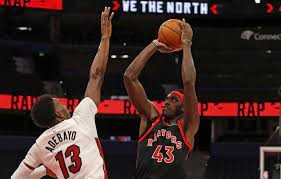 The Toronto Raptors and the Miami Heat are squaring off inside the FTX Arena in Miami, Florida in a big-ticket eastern conference matchup. The teams meet for the second time in the 2021-22 NBA season. The Heat won 104-99 in the last matchup on 18 January 2022.

Fred VanVleet is having an incredible season as he is averaging 21.7 points, seven assists and 1.7 steals for the Raptors. Similarly, Pascal Siakam is returning to his MIP winning year form with his 22.7 points, 8.1 rebounds, 6.9 assists and two steals over the past 10 games for Toronto.

The Miami Heat have been one of the best teams in the 2021-22 NBA season. They are currently the number one seed in the was eastern conference over the Nets, Bulls and Bucks with a record of 32 wins and 17 losses. In the last ten games, Miami has lost twice, averaging 112.0 points, 43.6 rebounds, 27.8 assists, 8.6 steals and 3.8 blocks per game while shooting 47.5% from the field. Their opponents have averaged 103.6 points per game.

Voting is over but we can still push the agenda.

Kyle Lowry has been one of the best offseason acquisitions as he is averaging 13.4 points and 8.3 assists for the Heat. Tyler Herro is having a great season as he is averaging 21.3 points over the last 10 games for Miami. Jimmy Butler has been the leader for the Heat with his 21.5 points while shooting 48.2% with 6.0 rebounds, 6.1 assists and 1.9 steals

The Miami heat is clear favourites to win this game against the Toronto Raptors. Miami is a better team fifth in the league with a +4.3 rating while the Raptors are 15th at +1.0 so far. Defensively, Toronto has allowed 112.7 points in their previous three games while Miami is allowing 100.8 points per game.

Both these teams are scoring at similar rates in the last five games, Toronto is averaging 108.4 points while Miami is scoring 107.8 points. Like their last matchup, Miami has a healthy roster that destroyed the Raptors in a 104-99 victory. Hence the Heat is most likely to win this game.

How to watch Toronto Raptors vs. Miami Heat?

All games will be available on the official NBA app. This game between the Raptors and the Heat will also be locally telecast on TSN Network and Bally Sports Sun.

Also read: Numbers Prove Joel Embiid Is the Most Clutch Player in the NBA This Season