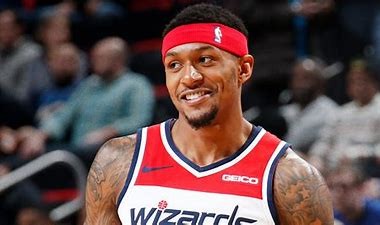 Bradley Beal is the shooting guard for the Washington Wizards. He finished the 2020-2021 season with 31.3 points, 4.7 rebounds and 4.4 assists per game. The Washington Wizards secured the 8th seed in the eastern conference this season. However, they did not make it past the first round. Recently, Bradley Beal had to pull out of the 2021 Tokyo Olympics after being tested positive for COVID-19. As the trade season arrives, Bradley Beal is rumoured to request a trade in the upcoming days.

Bradley Beal might request a trade before the NBA Draft

The 2021 NBA Draft is all set to take place next Thursday. Beal might go on to make a huge decision about his future in the league. The 28-year-old shooting guard might send in his request for a trade before the NBA Draft. Winning a championship with the Wizards is not looking too great at the moment. Russell Westbrook is also looking to move. Bradley Beal spoke about what may lie in the future for him during the playoffs.

Ultimately, I’m in control, I think that’s my biggest thing. People are going to report whatever they want, but I know where my mind is, and I know if it’s not coming from the horse’s mouth, then it’s going to be rumors. I expect them. S–t, they’re starting now. So it doesn’t change anything. I guess it’s going to increase a lot more this year with me going into the last year of my deal, but for me, I’m just relaxing, resting my body, and we’ll evaluate all that when summer comes.

Although Bradley Beal has not given an official comment, it will be interesting to see where he lands if he does decide to move from the Washington Wizards.

The Golden State Warriors are looking to strengthen their backcourt before the next season. They already have the likes of Stephen Curry, Klay Thompson and Draymond Green. The addition of Beal will make the Warriors an even bigger threat in the league. The best possible offer they can put forward is to give up their 7th and 14th picks.

The Toronto Raptors might look to add Beal to their roster as they might lose their veteran, Kyle Lowry.  The North will be looking to build a team that can create a post-Kyle Lowry legacy. The addition of Bradley Beal would be really helpful. Fred Van Vleet, Beal and OG would be big offensive threats. To trade for Beal, the Raptors will have to give up their 4th pick and maybe Pascal Siakam. The Raptors are however also eyeing Portland star, Damian Lillard.

The Boston Celtics are also one of the teams who have shown interest in Bradley Beal. Bringing Beal to the Celtics will be great for Boston. Beal already has great chemistry and a bond with the Boston star, Jayson Tatum. To acquire Beal, The Celtics will have to put up a big offer that will also include Jaylen Brown.

Where Bradley Beal will land this summer is still a huge question but wherever he signs, that team has automatically added an extremely talented shooting guard to their roster.