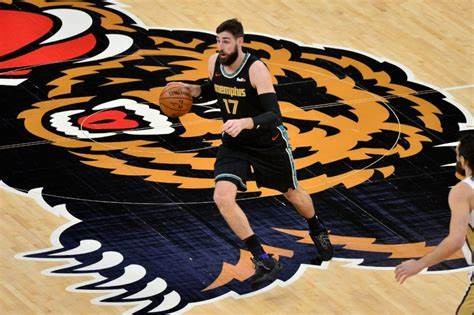 The Memphis Grizzlies have been running the Ja Morant era since 2019. The team has strongly relied on the young Morant and they also made the playoffs in 2021. The first defeated the Golden State Warriors in a thriller during the play-in tournament. The Grizzlies however did not make it past round 1. They lost the series 4-1 to the Utah Jazz. The NBA trade season has already begun and the Grizzlies have made a move. The move’s intentions are clear, they want to bring in more support for Ja Morant.

The Memphis Grizzlies have made a deal with the New Orleans Pelicans in order to strengthen their roster. The Grizzlies initially began the deal by acquiring Eric Bledsoe and the 10th pick. However, the trade became a lot more than just a single-player deal.

The Grizzlies have now finalized to send Jonas Valaciunas along with the 17th and 51st draft pick to the New Orleans Pelicans. In return the Grizzlies will receive, Steven Adams, Eric Bledsoe and the 10th and 40th pick in the 2021 NBA Draft. They also received a protected pick for the 2022 NBA Draft from the Los Angeles Lakers.

BREAKING: Memphis is finalizing a trade to send Jonas Valanciunas and 2021 Nos. 17 and 51 picks to New Orleans for Steven Adams, Eric Bledsoe, 2021 picks Nos. 10 and 40 and a protected 2022 first-round pick via the Lakers, sources tell ESPN.

The trade seems to be beneficial for both teams to a certain extent. The New Orleans Pelicans will now have more money to form a stronger roster. They have the opportunity to score big and maybe try and bring someone like Kyle Lowry to New Orleans.

For the Grizzlies, Ja Morant will have a little more support from Steve Adams who is known for his great basketball IQ and strength. The rookies that are yet to be drafted will hopefully also be a boost to the Grizzlies roster. The trade has also improved the Memphis Grizzlies draft capital.