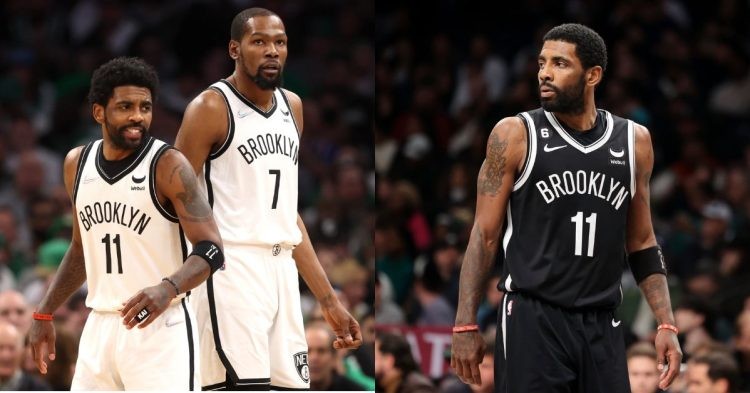 Brooklyn Nets point guard Kyrie Irving is having a roller-coaster of a season with the New York-based team. It is hard to say that things at Brooklyn are looking good. Kyrie might find himself with a new team next season, with all that is being going on within the Nets. Nothing can be said for sure, will Nets will be looking the same next season?

Kyrie is reportedly not happy with the team, and so is the veteran Kevin Durant. Durant who requested a trade out of the Nets has thrown the Nets future in the air. Part of the reason Durant wants a move is that he isn’t happy with the organisation. What has been started with Durant has an effect on Kyrie as well. But Kyrie is having a turbulent season on and off the court, with Durant out of the equation.

Irving faced backlash from the media, fans and other players for his involvement with anti-semitic issues. It doesn’t stops there, his endorsement deal with Nike ended and faced huge losses, and his signature shoes discontinued. Due to all this rumor started flooding that the Nets were looking to offload Irving. No team want to get in bed with Kyrie, despite the Nets’ best efforts.

While Durant’s contract with the Nets will be likely till 2025-26, Kyrie is on his last season with the Nets and will be a free agent in the summer. On ESPN, Stephen A. Smith stated, “Barring a trade before the trade deadline, this is their last season together. They’re not re-signing with Brooklyn. Kyrie is not re-signing with Brooklyn. Kyrie is planning to go to Los Angeles.” This will see him pair up with former Cleveland Cavalier teammate LeBron James.

Uncle Drew has expressed his desire not to re-sign with the Nets when his contract with the Nets runs down.Kyrie will be hoping to play alongside LeBron James in the Los Angeles Lakers. This leads to a question, what will the Nets next move will be? With Kyrie not starting the 2023-24 season with the Nets, it will have a domino effect within the team’s roster.

Rumor: If Kyrie Irving left the Nets, it is expected that Kevin Durant would depart from Brooklyn as well, per @Krisplashed

Nets will be letting go their second best player on the roster, which will bring an end to the Durant-Irving partnership. Despite playing 28 games for the Nets, 11 games less than Durant, Kyrie has been nothing but great on the court for the Nets. Uncle Drew is averaging 26.2 points, 4.6 assists, and 5.0 blocks. The Nets will have a tough time replacing such a talent. With Kyrie Not staying with the Nets, Durant will reconsider his decision to stick with the Nets to win another championship.