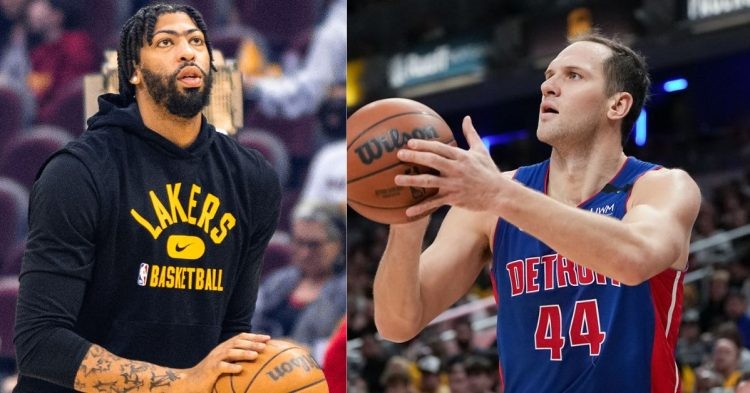 After a slow start to the 2022-2023 NBA season, the Los Angeles Lakers might just be looking to trade away one of their franchise cornerstones. Anthony Davis was instrumental in the Lakers winning an NBA title back in 2020. However, he has developed a reputation for being injured in recent times.

Anthony Davis is only 29 years old and should be smack dab in the middle of his prime. Be that as it may, his fragility and lack of conditioning have made the Lakers consider if they truly want to invest in him. After all, doing so would mean he would become the face of the Lakers after LeBron James retired.

In any case, rumors have begun floating around that AD’s time in LA might be done. It is certainly too soon to tell. Nonetheless, it looks like the Los Angeles Lakers have shown interest in Bojan Bogdanovic. We should wonder about the legitimacy of these trade rumors and how this could all potentially go down.

This NBA offseason was one where many of us expected the Lakers to trade Russell Westbrook. However, this did not come to fruition despite them signing on other point guards like Patrick Beverley and Dennis Schroder. None of the new additions have really helped the roster so far this season.

That begs the question of whether it is finally time to trade their stars and rebuild. If they were to do so, one could argue that their situation would be better than it is right now. They are reported to still be in the bidding race for Bojan Bogdanovic from his current team, the Detroit Pistons. Let us take a look at 3 potential options for the Los Angeles Lakers.

AD has missed around 62% of the Los Angeles Lakers regular season games. The amount of time he spends off the court has definitely hurt the Lakers in his time there. Despite his injury-prone label, we are certain that the Lakers and Pistons could come to a fair deal.

Putting good shooters around Russell Westbrook and LeBron James might still work for the Lakers. Moreover, AD has deteriorated in the shooting department and is making only 25% of his three-pointers and 78% of his free throws. A reliable big and good shooter would certainly be a trade-up at this point in time for the Lakers.

2- Trade all the 3 Lakers stars and rebuild

There is no denying that the Los Angeles Lakers look to be in a grim situation right now. Other than the bubble championship, they have not really seen any postseason success with their current stars. LeBron played a role in bringing both of them into the team.

However, we already know that the King desires to play with his son if he makes it to the league. Therefore, the franchise knows they have LeBron for only a certain period of time. It would make much more sense to trade him and rebuild as opposed to waiting for his inevitable decline. The same should be said for Russell Westbrook and AD in their current stages of careers.

This is perhaps the worse option for the Lakers. However, it is certainly not completely out of question. The Lakers franchise knows that the King is expected to pass Kareem Abdul Jabbar in points scored this season. They would certainly want him to be in a Lakers uniform for it.

Rusell Westbrook and AD have problems of their own. If the Lakers are willing to throw in draft picks, they will be able to trade these two stars in order to surround LeBron with a more complete team.

All of this could potentially happen. But in all fairness, the team might not make any moves at all and just accept this roster. If there are no good deals on the table, and it would risk upsetting the King, the Lakers shouldn’t be hasty in trading away what they currently have.