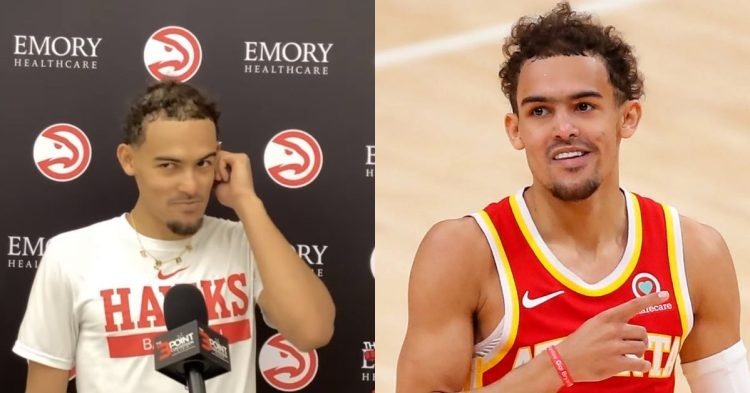 Trae Young is the star point guard for the Atlanta Hawks. He has carried them back into relevance after being drafted and traded to the franchise in 2018. Young is well-known throughout the league due to his ability to shoot the ball from great distances. In fact, he has been compared to other NBA stars like Stephen Curry and Damian Lillard for the same reason.

Ice- Trae has already built a reputation for himself in the league. He managed to carry the Hawks to the Eastern Conference finals just a year ago in 2021. It seems that he has embraced the role of a villain or bad guy to improve his performance further still.

With that being said, haters are always looking for something to hold against him or make fun of. The Hawks guard’s hair has been a talking point for a while now, “Trae Young’s hair makes me uncomfortable af bro.”

People are under the assumption that there is something wrong with him, which is why his hair is falling apart at a young age. We should wonder how much truth there is to this and what is actually wrong with Trae’s hair.

Sometimes, the deepest questions in life have the most simple answers. NBA fans initially assumed that he was suffering from some form of hair fall and illness. This gave a legitimate explanation for his hair being the mess it has been over the years. However, in truth, Young simply doesn’t give all that much time and attention to his hair. He even addressed the issue in a discrete manner a while ago.

Bro why did Trae Young cut his hair come on bro I can’t defend this balding pic.twitter.com/B5Cb8bBqEQ

“My hair is different than a lot of people’s. I like my hair, I like the fade, and I like the little design I have. I’m cool with it. Obviously, my hair is thin on top so it looks like a bald spot but I really could care less.”

Trae young is good fam dont get me wrong. But I just dont like that mf lol something about his bed hair be irkin me

Young is likely unaware if this is a medical condition of some form. He simply doesn’t care that his hairline isn’t his best feature and has found peace in who he is as a man. Many other NBA players like LeBron James have receding hairlines and some problems as well. However, that is not brought to our attention as frequently as losing hair is commonly associated with advancing age.